Posted by Michael Mulvey at 1:30AM 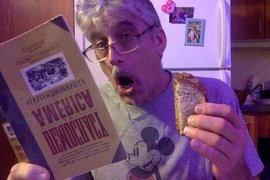 Elizabeth Miller MFA is a professor of Communications Studies at Concordia University Montreal as well as a documentary filmmaker. Her film The Waterfront was screened at FLEFF in 2007.

Miller describes her relationship to media as a concern with, “all the different possibilities in which it can mediate social relations.” Her most recent project The Shore Line is a collaborative web documentary project, an interdisciplinary work that presents in the form of an electronic textbook.

According to the website, The Shore Line is a storybook for a sustainable future. Shoreline is a collection of interactive maps and over 40 videos featuring individuals who are confronting the threats of unsustainable development and extreme weather with persistence and imagination.

I recently spoke with Elizabeth Miller who shared her views as an educator, filmmaker and socially engaged new media artist. Here’s some of what she had to say:

“Media in itself does not create change."

"It’s all the social relations that are facilitated, both in the production, but also in the dissemination of the project.” Filmmakers like Miller, who have produced long form documentaries, have seen a shortening of the form. One reason for this is the speed at which social media informs and supports coalescing social movements.

I asked Miller to comment on the role of education and the challenges faced by the new generation of socially engaged media artists: “It’s overwhelming, the pressure for these young people to have to brand each part of their lives every moment of the day. Even in social movements the lines blur between the individual’s branding and the desire for social change.”

“I feel really lucky to be in education."

"It’s a special place where we can have the dialogs and discussions that I worry are not happening enough in some of our other public spheres. There are so many new literacies today. It’s never been more important to instigate critical literacy in communications."

"There are all these new ethical dilemmas we are seeing play out on line like, have people gotten permission to circulate media on line, that they’ve recorded at a rally? We’re seeing lots of new implications.”

"I think the classroom is a critical place to discuss the entire realm of what goes into a media creation: from ethics to aesthetics to the possibilities for social change."

There’s a real unevenness in what young people are being exposed to." Miller noted that, "there are incredible abilities with the new technologies, but not always a sense of ways that media has worked in the past and ways they can use that in pursuit of their own objectives in the present."

As a parting thought Elizabeth Miller offered this: “There’s never been a time as important as now to learn more about the practice of commoning: the commons as a method, the commons as a value, and the notion that rather than working privately in our personal domains, that we’re really trying to use, occupy and learn as much as we can about commons, whether they be the environmental commons or the media commons.”

To learn more about Elizabeth Miller and her work, visit her website http://redlizardmedia.com/