A Conversation With Jeremy Levine 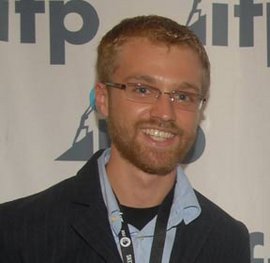 This year, FLEFF is pleased to feature the work of Ithaca College '06 alumnus Jeremy Levine, who manages the full-service production company Transient House with co-producer Landon Von Soenst. Their latest feature documentary, "Good Fortune" will be screened at the festival on Sunday, April 17. Earlier today, Levine and I spoke about his career, FLEFF, and his hopes for the screening.

Evan Johnson: What made you want to make movies?

Jeremy Levine:  I did lots of stuff in high school that was really "at the high school level," but I knew I really loved making films. Also in high school I really got hooked on politics and social justice issues. I realized even before I got to college that documentary was the way to combine film with social justice and i've been on that path on ever since.

EJ: "Good Fortune" deals in lots of social justice issues. What was your experience like making that documentary?

JL: Making "Good Fortune" in Kenya was an incredible experience and an incredible challenge. The reason Landon and I started "Good Fortune" was because we realized our relatively privileged position as college graduates of the Western world and that there were vast difficulties in the developing world and we wanted to do something to help. We both had that drive early on - the naive urge to go out there - but also, at least for me, very little understanding of what that meant. It's amazing to know that there are these vast problems and that there are these tremendous resources but so often, the resources are just going to waste. It's frustrating and it's another great tragedy.

EJ: Do you have any other plans for the film? Is there anywhere else you'd like to see it go?

JL: Last night (2/22/11) we had a screening with the Young Professionals For International Cooperation [a program of the UNA-USA] and we had a long discussion, people asked really tough questions and we had an amazing dialogue. I think showing it to people who have the ability to make changes is where I'd love to see the film go. I don't think this film is going to change the world but I think it's important to hear the voices of those we don't often hear in the West. We're hoping to get it to screen more in Africa as well.

EJ: What are you looking forward to at FLEFF?

JL: When I was a student, I thought that FLEFF was an amazing festival and I never thought I would come back as a presenter so for me it's really incredible to come back and talk to the current students and the community.

JL: I hope that when people watch "Good Fortune," it raises some important and difficult questions of what foreign aid is, what  foreign development is and should people be helped even if they don't want the help. Ultimately, change needs to come from the bottom-up and that's the lesson I hope people learn.