A film buff, a networker, a blogger, and a staff member

Posted by Tianhong Yang at 1:27AM 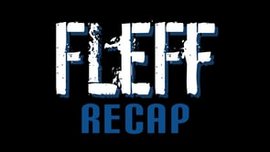 I wonder what would happen if all the artists, the scientists, and the most creative people in the world came together to imagine future landscapes. In fact, I think FLEFF has become such intellectual environment for provoking collective encounters.

Throughout the week, I played a number of roles that helped maximize my FLEFF experiences. And I also realized many benefits to attending independent film festivals.

In one weekend, I watched ten films at Cinemapolis and engaged in five post screening audience discussions with filmmakers, producers, distributors, artists, community groups, and scholars. I not only watched stimulating films that I wouldn’t usually see but also met filmmakers from all over the world. Within two days, I learned about the Partition of India, nomadic lifestyle in Mongolia, railway system in China, and fracking issues in the U.S.

The idea of having conversations with professionals in the film industry made me nervous. However, my fear disappeared the minute after I spoke with Ms. Karin Chien at Red’s for her genuineness. To my surprise, I got to know many of the festival guests and even made connections with several producers at the end. I expressed my interests in Prof. Bradley Rappa’s upcoming project of clean energy in Ithaca. As a result, I will be conducting research with him next fall.

Besides film screenings, I attended a concert, a new media presentation, and multiple lectures. I listened carefully to panels, speakers, and filmmakers while writing down quotes and key points. The Friday Lab, a collision of ideas, was my favorite among all campus events.

During my shifts at Cinemapolis, I handed out schedules and answered questions. I felt very rewarding when people told me that they enjoyed one film or a discussion. As a staff member, I also learned what it takes to organize and execute a film festival. I became more aware of the importance of independent film cultures around the world.