A Night At the Opera: IC Alums Perform Arias for the FLEFF Team

Posted by Julianne Grillo at 9:48PM 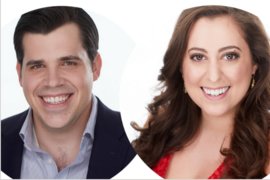 Opera singers usually perform for audiences of twenty-five hundred. This Tuesday, they performed for just nine.

Coloratura soprano Elena Galván and lyric tenor Daniel Bates graced the FLEFF team with an exclusive performance, a first in FLEFF history. In a small, cinderblock room in the School of Music, the award-winning vocalists shared anecdotes from their operatic careers.

Galván and Bates, both IC alums, found themselves back where it all began. After both studying music here, their vocal educations continued into graduate school in San Francisco. About seven years later, they return to their alma mater and Ithaca, NY with a wealth of experience.

Both knew they were interested in studying music, but opera did not immediately find them. While undergraduates, Galván and Bates studied secondary choral music education and sound recording technology, respectively. After auditioning for IC’s operas, the two shifted their focuses to classical vocal music.

Like an Olympic athlete, Bates explains, vocalists build muscle and train to perform healthfully. Unlike other vocal musicians, operatic performers train without the crutch of a microphone. Their voices must reach from the cheap seats to the balconies.

And within the confines of a small, cinderblock room in the School of Music, opera is loud. Galván and Bates’ voices rung through the space effortlessly, reverberating through each member of the mini-audience. I still felt chills ten minutes after they performed their arias.

Playing piano for arias is difficult, Smith explained, because the accompanist must reduce the often elaborate orchestration to just a few musical motifs.

This provides a lot of creative control, but the accompanist must also listen for cues and anticipate the choices of the vocalist. The role requires adaptability and confidence.

The opera duo concurred. From their perspectives, classical opera exhibits evolutions and experimentations from even the earliest and most well-known composers.

Classical music is always evolving. The advent of contemporary operas proves that opera as a style of music is neither stuffy nor dead.

Opera is very much alive.

Galván and Bates will perform at the Geographies Concert in Hockett Recital Hall on Tuesday April 10, 2018.