A Talent in The Crowd

Posted by Hannah Basciano at 6:25PM 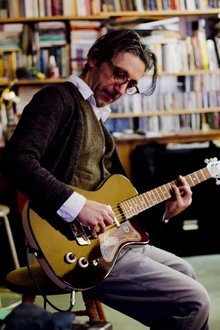 Since the invention and adaption of sound film in the 1920s, silent film as a medium has all but become diseased. Yet, FLEFF brings it back to life.

The Finger Lakes Environmental Film Festival is known for its reinvigorating of classic silent films with the music of contemporary musicians.

A marriage of old and new, silence and sound, story and song

—all within a nostalgic habitat paying homage to the traditions of early cinema.

Tonight, FLEFF will be screening The Crowd with the music of the world renowned Cloud Chamber Orchestra. Robby Aceto, one of the orchestra's talented musicians, in particular is very excited for the performance.

"It's built-in to the ethic of Cloud

Chamber Orchestra that our performances are completely improvised, so performing at FLEFF a is a great challenge... as a musical contributor you need to ramp yourself up into a state where you are receptive to the challenge of becoming part of the film, but also willing to work with what fate hands you as your music in that moment."

A member of the FLEFF community for more then ten years, Aceto researched the famous film, The Crowd, extensively in order to embody the story within his performance. He is specifically

struck by the organic realism the film succeeds in portraying throughout its narrative.

"It just feels incredibly real. There's a story that in the '60s, when director Jean-Luc Godard was asked why no one made films about ordinary people and the content of their emotional lives he replied 'Why remake The Crowd?... it has already

Aceto hopes to be able to find a complimentary tone within his performance to accurately partner this form of narrative.

The film, accompanied by Aceto and his fellow musicians of Cloud

Chamber Orchestra, will be screened at Cinemapolis Saturday, April 11, at 7:00pm. Don’t miss out on this fantastic performance!

Also, don't miss the relationship between the lead actors that Aceto recommends paying close attention to!

“If you are not moved by the phenomenal love scene that takes place between Eleanor Boardman and James Murray on the slopes above Niagara Falls, you might want to check

yourself for a pulse... if you don't feel your heart pulled around and absolutely breaking for them, it is probably not beating.”

Have you ever seen a silent film with live music before? How is the experience different from seeing a synchronized sound film?