Posted by Alisha Tamarchenko at 1:45PM 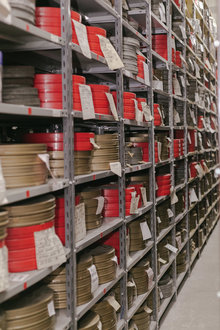 When Andres Levinson first arrives to work in the morning he goes straight to the vaults. He checks the humidity and temperature of the rooms. This is one of the most critical steps of his job. A miscalculation could cause the deterioration of Argentine history.

The Film Museum and Archive in Buenos Aires, also known as the Museo Del Cine, stores more than 90,000 films in various formats. Andres Levinson works here as a film historian, archivist and restorer.

Levinson’s job is very multifaceted. Being a film archivist is in equal parts restoration as it is researching and understanding the material you are working with. After starting his day at the vaults, he then spends the rest of the day on whatever project he is working on at the moment.

The first moment when he gets access to a recently discovered reel is his favorite. When he gets a can, the first thing he does is look at the title on its side and if he’s never heard of it he puts the title into Google.

The best feeling for him is when in that moment Google comes up with nothing. Then you know that you’re the first person in the contemporary world to have access to this reel. “That’s wonderful, to have something in your hands that’s not in Google,” he says laughing.

Levinson is originally a historian. He leads a second life as a history professor at the University of Buenos Aires. In part, he credits his academic background to his ability as a film archivist. His perspective as a historian is critical in being able to understand the past when he watches old films.

Film preservation and academia are two very distinct worlds but Levinson finds that they compliment each other perfectly.

For him it is a great way to stay in touch with the context of the films he works on as well as being in tune with all contemporary research that’s happening on that period. “It’s a good balance,” he says. He also tries to incorporate some silent films into his classes and has found that his students really engage with them well.

His most recently finished restoration is a 1917 silent film called El Último Malón, which will be shown at FLEFF this year. He had been working on it for the past two years.

There are a lot of peculiar and unique things about this film that Levinson says make it very special. Firstly, it is one of only seven Argentine films from the Argentine silent era. Additionally, it is almost complete which is very unusual and rare. Furthermore, the content and the style of filming is very rare and unique for the time period.

Furthermore, the Mocovies Indians are also a group that has almost entirely disappeared from that region and so because of that it really is an incredible document.

Levinson is very excited to bring this rare and special film to FLEFF this year and share it with the community here.

At the end of the day, however, Levinson believes film restoration isn’t of upmost importance. Especially in Argentina, there so many other bigger and more pressing issues in the country and sometimes he does ask himself, “what am I doing?”

But then, when he shows films to audiences and sees their positive responses he realizes that his work holds a place of importance.

He also tries to show his films outside of academic settings and brings them to other communities that may not have access to those spaces. Those are some of the screenings he enjoys the most; in schools or workshops in very poor communities such as the “shanty towns” in Buenos Aires. In seeing others feel the same joy and love he feels for silent cinema, he feels compelled to continue his work.

Levinson is very excited to come to FLEFF this year and show the film. He says they had a great experience showing a different film last year, with a great presentation, discussion and reception and can’t wait for this year’s festival. “Its not so easy to find a good audience for these kinds of 100-year-old films,” says Levinson and is grateful that they’ve found a home in Ithaca, NY.