Posted by Kayla Reopelle at 4:30PM 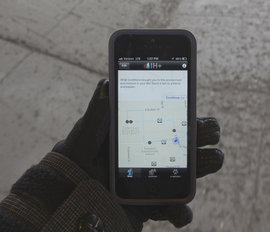 Following the initial route for our Indeterminate Hike

Flakes of snow melted in layers on the screen of my iPhone.

I tried to absorb the moisture with my smart-gloves, but blurred the map guiding myself and four other FLEFF Bloggers and Interns on an Indeterminate Hike.

Indeterminate Hikes+ is an app for Android and iPhone created by Ecoarttech, an environmental new-media collective.

A few weeks ago, the blogging class Skyped with Leila Nadir, co-founder of ecoarttech. Her ideas of renegotiating space, expanding definitions of nature, and blurring the lines between the urban and the wild encouraged us to explore Ithaca through the lens of an Indeterminate Hike.

Despite the cold, we met in front of the Tompkins County Library on Sunday March 23 at 1:00 pm.

We had four points of engagements as we walked around the edges of the Commons.

Each engagement required a text or photo which were included in the field notes for the hike. The hike had to be reset part of the way through because of a small glitch, but we ended up recording information for four tasks:

The required technological mediation of our engagement was unexpected.

It brought in people who were not present during the hike into the sphere of the hike’s influence through the reception of observations without context via text message. Proof of sending each text message and taking each picture was required before moving on to the text task.

This hike revealed the layers of action occurring simultaneously in any moment of any environment. I had not considered that the sun makes sound, that smiling and laughing shifts moods of a space, or the vertical layers of transportation which occur at any given moment.

The route was laid out on my phone, which took me out of my environment. My eyes were glued to the screen instead of glancing around the space I was in. I did not look at my embodied environment, but focused on the virtual environment in the palm of my hand.

Despite the technological distraction, we were taken into new spaces of the Commons that I had not visited before. One location was the Ithaca Conservatory of Music building, the predecessor to our school on the hill.

Our Indeterminate Hike transformed what could have been a pleasant stroll on a chilly day into an opportunity to discuss the nature of space.

Leila Nadir and Cary Peppermint, co-founders of ecoarttech, will be speaking at FLEFF for the panel on Dissonant Environments on Wednesday April 2 at 7:00pm in Hill 104 and will be running a workshop on Thursday April 3 at 2:35 in the Park Auditorium.