An Introduction: The New, the Excited, and the Ready

Posted by Hannah Basciano at 7:26PM 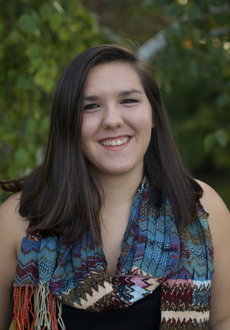 Cotton has been cultivated for the past 7,000 years.

Cotton is the most popular fabric in the world.

The hazy blue that contrasts the bright red of this year's theme, habitats, is actually a microscopic image of a cotton cell. Alongside the cotton is cancer—the floating, spiky red bodies.

Both are international subjects of influence, whether it be in the theater of health care or economics. Both are global, both are important, and both create habitats.

This year, FLEFF will explore the concept of habitats while creating one for festival-goers to quell their love of art, music, conversation, really good popcorn, and especially film. I, for one, am very excited to immerse myself in the innovative environment alongside my fellow cinephiles!

My name is Hannah Basciano, and I live in two different worlds.

Back home in Lancaster, Pennsylvania, I get stuck behind Amish horse'n'buggies on my way to work at the barn. On Saturday mornings I get fresh Lebanon bologna and vanilla glazed donuts from the oldest farmer's market in America, while I spend my afternoons along the banks of the Susquehanna River or in my favorite art gallery downtown.

That is, until I get to go back to school. I am a sophomore Documentary Studies and Production major with a triple minor in Honors, Politics, and Religious Studies at Ithaca College. I'm an intern for a local documentary team, the Veverka Brothers, and stand as the President for Ithaca's colony of Delta Kappa Alpha, the National Professional Cinema Fraternity.

Ithaca has taken me to the top of Mayan ruins in Belize, and to the bottom of Skaneateles Lake scuba diving. I've learned so much already in my two short years here, but I'm eager to learn more. FLEFF just happens to be the perfect place for me to do that!

I'm excited to witness first hand all of the behind the scenes work that goes into running a great film festival. I hope to converse with filmmakers, distributors, musicians, artists, and other audience members about our shared experiences. It is an honor to be a new member of the FLEFF Blogging team, and I plan on contributing my interview training as a journalist as well as my taste for visual narratives as a documentarian.

In these weeks leading up to the festival I will be learning and doing something new everyday...Wish me luck!

Does the habitat of your hometown differ from where you live now?