Posted by Gabriella LoBue at 11:09AM 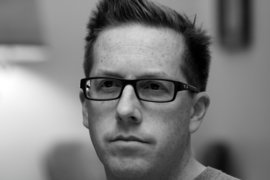 This week I had the pleasure of meeting and interviewing Andy Watts, assistant professor at Ithaca College, and a member of the FLEFF staff. He kindly shared interesting viewpoints regarding his specific role in the festival, his personal thoughts of this year’s theme, and an overall perspective of the festival as an insider.

After growing up and living in New York City for most of his life, Watts completed graduate school at Colombia University, studying film production and screenwriting. He has since worked in the film business in positions such as production assistant, and has also worked on set lighting. Watts currently teaches at Ithaca College, instructing film production courses, and occasionally screenwriting.

In addition to his current teaching agenda, this will be Watts’ third year instructing one of the FLEFF mini-courses. He is particularly fond of the title, Keep on Moving: Road Films Across the American Landscape, which is a reference to this year’s theme. He describes teaching the course as fun and “a bit of a challenge,” being that it is outside of what he normally does.

Watts admits that constructing the mini-course can be tricky; the course curriculum must be designed early in advance, while the festival programming isn’t released until much closer to FLEFF’s actual starting date. Therefore, the only indicator of what that year’s festival may include is its theme, which leaves Watts to speculate, around which he then designs the course.

In regards to this year’s theme of LANDSCAPES, Watts is most curious to see how the festival will be curated, and is interested to see what the topics and subthemes will consist of. He also appreciates the theme’s versatility, and the many directions that it can be taken in; hopefully one of which will fit his course.

Watts describes FLEFF as being a great resource that is certainly worth taking advantage of, with its films, speakers, and other events. Despite the well-attended screenings that Watts has been to, he still wishes that more people would come to see the hand-delivered, fresh, and exciting programs that the festival has to offer.

Being the father of an almost-six-year-old, Watts added lightly that he is a “film professor that doesn’t get to see any new movies.” He does, however, have the pleasure of watching Frozen repeatedly. FLEFF provides an opportunity for Watts to see new and unique films each year despite his busy schedule, and he is looking forward to what FLEFF 2016 and its theme have in store.

Watts is currently working on a documentary that examines a prison theater group, and he hopes to have it completed by this coming summer.

Have you ever taken a FLEFF mini-course before, and if so how did that change your experience with the festival?