Posted by Sydney Augustine at 5:05PM 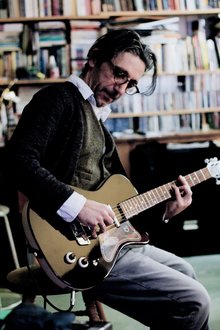 Robby Aceto vividly remembers when his mother took him to the Eastman Theater in Rochester, New York to see world-renowned composer, conductor, and pianist, Leonard Bernstein.

“I was about ten or eleven... at that time he [Bernstein]  was doing his outreach lecturing and giving performances all over the country; really at the height of his powers. Everything about him just floored me and I remember thinking That is just... IT,” Mr. Aceto recalls.

The sixties was a decade that basked in new musical ideas, free love, and youth culture, which had a tremendous impact on Mr. Aceto growing up.

It wasn’t only Bernstein, but the “Beatles, Bob Dylan and the folk movement, vernacular music of all kinds, the guitarist John Fahey, those incredible legacy recordings by Alan Lomax of deep blues... all contributed to that gestalt; a kid coming of age in a whirlwind of musical possibility,” Mr. Aceto says.

When it came to pursuing a career in music, there was never really a question about it Mr. Aceto for he was brought up in musical household and gained broad exposure to various artists and genres. For Mr. Aceto, it was just a matter of figuring out how to make it my reality.

Since then, Mr. Aceto has turned his passion into a reality by becoming a well-known and respected musician, composer, and musical collaborator for the last several decades, which he gratefully acknowledges allowed him to find his voice in the process. .

Despite his success, Mr. Aceto believes that there is still always so much more to learn and discover about music, saying, “No matter what you think you know, you really don’t know much of anything. How amazing is that?”

Posing such question embodies his long history and involvement with the Finger Lakes Environmental Film Festival, which began in 2006. That year, when FLEFF was was still a co-production between Ithaca College and Cornell University, Mr. Aceto scored Slawomir Grunberg’s Saved By Deportation.

The following year, Mr. Aceto was invited to participate as guitarist in a group formed by local composer Judy Hyman to realize a composition/collaboration she had been commissioned to do for FLEFF in 2007. During that performance, he was given an opportunity to improvise freely, which apparently made a lasting impression on Dr. Zimmermann, who has been the co-director of FLEFF for over a decade.

Dr. Zimmermann later suggested for Mr. Aceto to collaborate with musicians, Peter Dodge and Chris White. Taking this advice, the improvisational trio came together to form the Cloud Chamber Orchestra, who have been creating live music for silent film since 2008.

Their first live score, which was done for the 1925 documentary Grass; A Nation’s Battle for Life, has become the template for every improvisation they have developed since.

“I think we were all quite pleasantly surprised at how well our first  performance had succeeded… but it also served to set the bar very high for subsequent collaborations. So we always try to keep that first gig in mind and try to preserve something of that sense of discovery when we approach a film,” Mr. Aceto says about the standard Cloud Chamber has tried to maintain for the last ten years.

The balance between being abstractive and inventive, but also well-prepared and precise can be incredibly challenging for the Cloud Chamber Orchestra. but Mr. Aceto hopes that with every improvised score the trio can make the meanings of old films accessible to a modern audience.

This year, they will be trying to achieve exactly that when they premiere an improvisational score for El Utimo Malon, which Mr. Aceto believes strongly embodies FLEFF’s theme - ‘disruptions.’

Though the 1917 silent film, which is an historical dramatization of the last indigenous rebellion in Argentina, is Alicides Greca’s  first and only film, Mr. Aceto believes that the forces and circumstances Greca was talking about over a century ago, are still very much a part of our existence today.

“It’s a story we have seen played out again and again wherever there has been a colonizing force that came into conflict with a resident population.  The indigenous people had their way of life disrupted by the colonizing forces...Processes and institutions [established by colonies] are disrupted by first-people’s desire to wrest their self determination back from their exploiters. This back and forth basically causes a few generations of misery… until something like a status quo is achieved.” Mr. Aceto says about the familiar forces and energies that are very much a part of the existence we experience all over the world every day, whether we choose to recognize it or not.

Echoing the famous words of Bertolt Brecht, the dissident writer and brilliant practitioner of experimental dialectic theater, “Art is not a mirror held up to reality, but a hammer with which to shape it,” Mr. Aceto believes it is important for him as an artist to be personally disruptive as well.

Going into more depth about his own role as a disruptor, Mr. Aceto says, “If you are committed to art as a way of life, you have to recognize that its primary function is not necessarily to simply make commentary, but should also be provocative. If your art isn’t in some way political, it probably isn't art; and the more personal a statement is, the more revolutionary and transformative it should be in principle. All art comes from action, not from inaction….”

And on Saturday, April 6th at 7:30 pm, you can experience the disruptive live performance of Cloud Chamber Orchestra as they will be improvising for El Ultimo Malon at Cinemapolis.