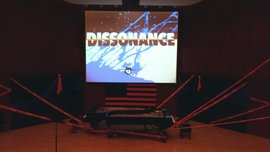 The set for the American Dissonances concert

The American Dissonances concert was a contrasting assembly of American tunes played on two pianos, a bass, a trumpet, a flute, with Mezzo-Soprano vocals.  A screen played scenes of iconic geography throughout the U.S., and eclectic historical scenes such as activist movements, early home-videos, airplane production in the World Wars, and more.  The show was well-received and was given a standing ovation.

Here are a few comments from audience members in response to the question "What was your favorite piece and why?"

"The Gershwin pieces were wonderful for that generation and for ours."  - Mr. Magoo

"I don't usually like to rate the songs.  They were all good." - Anonymous

"What was it called...it had the bass...Oh, the three preludes.  I liked the second part." - Lauren McGrath

"I think Simple Gifts was my favorite because I heard it in second grade when I was in a play, and I kept the sheet music because I was in the play." - Kaylyn Abenojar