Posted by Cindy Yong at 7:31AM 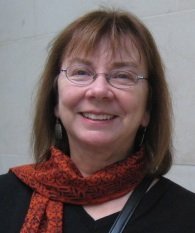 Towers built on paper cover every surface and their precarious heights remind me of Jenga.  Red, blue, purple folders lay criss-crossed.  Potted plants sit along the window - pink flowers contrast against the snow outside.  Bookcases fit snug in their angles.  The spines read, "The Impossible Will Take A Little Time," "America's Best Newspaper Writing," "The Freud Reader," so forth.

Barbara Adams' space resonates how much she vividly immerses herself in literature.

Barbara Adams writes as the main theatre critic and feature writer for the Ithaca Journal and Ithaca Times.  She became the Vice Chair and Founding Member of the Ithaca City of Asylum.  Within the Writing Department at Ithaca College, Professor Adams remains the Director of the Internship program and an associate professor.  Among students, she exists as a known figure for her tenacious eye for detail.

Undoubtedly, Professor Adams serves as an influential writer and reader, but she admits her creative expression remains in photography.

"My grandma had a little box brownie camera," she leaned closer as her hands carefully made the motion – shoulders curved slightly inward in a protective gesture.

She shared, “My mother gave me childhood photos.  There's one photo where I'm sitting there.  5 years old.  And I was helping my father – developing film.  I have no memory.  But isn't that amazing?"  Her cheeks rose as she smiled.

Even with no memory of that first film encounter, this smile projected that the wonder and joy from that time neither dissipated nor disappeared.

This love of images exudes one reason why Professor Adams loves festivals.  The 2015 FLEFF remains no exception with its theme HABITATS.

She commented, "Themes are always like creative prompts.  They get you thinking and talking, seeing so many things that can connect.  That's the whole point - to see the interconnections."

Discussions are the motivating engine behind FLEFF.  During FLEFF week, the Cinemapolis lobby will buzz as strangers talk about issues the films engaged with.

Professor Adams emphasized the FLEFF energy, "Such a concentration of expertise and creativity."

Film festivals are an overstimulation where there are more things than the audience can possibly participate in, Adam says.  "The remarkable reality stands how there are famous scholars, poets, artists, and filmmakers who are all brought to Ithaca, NY.  This fortune should not be taken for granted."

The paper towers on Professor Adams' desk must be reminiscent and stimulating of the very deadlines she so dislikes.  Yet there exists a certain comfort, rhythm, and familiarity.  No matter how high the stack, I do not fear the fall.  Similarly, I do not fear that Barbara Adams will ever stop – she will continually possess that innate intuition and curiosity which lends her as one of the most respected interviewers and professors.  She exists as a critical piece of the scaffold within the local community, Ithaca College, and FLEFF.

How will you take advantage of FLEFF this year?