Posted by Lydia Lepinski at 11:41PM 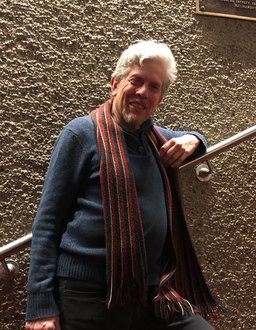 It was early in the evening on Friday in the Dillingham Lobby. Most of the lights were off and the only students in sight were busy bringing equipment into the theater. Dr. Norman Johnson emerged from the scene with a welcoming smile. He agreed to meet with me at 6 o’clock, an hour before dress rehearsal for opera, Dido and Aeneas, which is now showing at Ithaca College.

Dr. Norman Johnson is the theatre director for the FLEFF Infiltrations concert and for FLEFF actors working on performing for the silent film/live music. He was an Associate Professor at Ithaca College for 28 years, but has since retired in in 2018.

Dr. Johnson has been involved in three concerts of FLEFF. He explained to me that his main role in FLEFF involves working with musicians and participants’ plan their material and directing them throughout the event behind the scenes.

“It has never been a normal concert in the way it is presented,” is how Dr. Johnson describes the concert. He mentions that it is important to incorporate the theme within every piece and to make the concert more interesting every year by being outside of the box. The creative process of the concert has always been one of his favorite aspects of FLEFF. He excitedly shares with me, “We’re doing something with blue lights and a couple yards of blue voile fabric this year. I don’t want to ruin the surprise but, the concert hall will be infiltrated.”

I asked Dr. Johnson, what advice he had for someone who has never been to FLEFF before. He responded with, “I used to tell my students: you have to go to something you know nothing about, that you don’t even know you’re interested in.” Dr. Johnson ends our conversation by saying there is an event within FLEFF for everyone.

The FLEFF Infiltrations concert will be on Tuesday, March 25th at 8:15 PM in the Hockett Family Recital Hall. Admission is free.