Posted by Chloe Wilson at 7:34PM 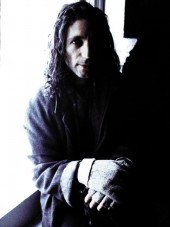 Back for his fourth year, Robby Aceto is at FLEFF once again!

I got the chance to listen to Acteo speak about his work.  This year, he'll be performing live music to accompany the silent, 90-year-old documentary film Nanook of the North (he's part of an improvisational trio, how cool is that?).

Here are some choice quotes from Aceto's talk, ranging from live music to film festivals itself to contributing to the microtopia of FLEFF.  Hopefully this helps you become a part of the moment, FLEFFers!

"A big part of FLEFF has always been the pairing of live music with silent film.  Why do we do that?  It's a tradition that's just as much a part of film history as anything."

"There's a tendency to feel superior to people who created things hundreds of years ago... These guys were making films and they were making it up as they go along. They didn't have a lexicon of technology to choose from.  They had to figure out as they went along how they were gonna do this.  In a way, they had to work and think more creatively than a filmmaker does now.  I think that, as an improviser, that really speaks to me."

"First time at FLEFF, I was hired to be a guitar player for an ensemble that was playing a commissioned work.  There was some spoken word and it was a great experience, it was great fun, and then Patty said 'We want to do something again.' So get involved in as many things as you can.  It's a crapshoot, being a musician, but it's worth it."

That last quote was my personal favorite; it held a lot of weight to me.  It really reminded me about how the difference that each person can make, no matter if it's intentional or not.  Every person's action (or lack of action) contributes to something, whether we notice it directly or not.

Aceto played some of his clips for us, and I can't wait to hear more!  Aceto calls himself a "color guitarist," but his music has clearly been influenced by his previous collaborations with musicians who specialize in other instruments.  You can check out some of his work here.

Lean back, pop on some headphones, close your eyes, and listen to Aceto's work.  Do you have a favorite piece?  Are you looking forward to hearing him perform at FLEFF?