Carlos A Gutierrez: Change in the Film Industry

Posted by LeeAnna Campbell at 12:36PM 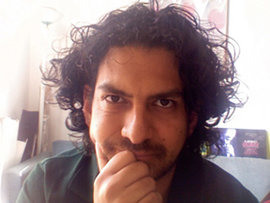 “We don’t have to reinvent the wheel. It’s already there”

Change is inevitable. This is just a fact of life. Nothing is ever supposed to remain the same as time continues to tick away.

No one understands this fact better than Carlos A. Gutierrez, co-founder and executive director of the Latin American focused media arts company Cinema Tropical.

Cinema Tropical is all about change and moving forward. In Gutierrez’s work, that change comes in the form of trying to bridge the worlds of cinema and media studies into the world of visual arts, two worlds that are routinely separated from one another.

To Gutierrez, there should be more conversation between these two areas of the arts since the film world can learn from the visual arts in terms of theory and practices.

Unlike the visual arts world, Gutierrez views the cinematic world as isolated. The cinematic world is a steadfast rock unwilling to really change in this quick paced world. Some of this stubbornness, to Gutierrez,  is also seen in film school.

How film is taught in film schools is still stuck in an outdated mode that primarily focuses on the production aspect of the industry. Talk about the distribution or exhibition side of the film industry is best described as non-existent. A majority of students are not even aware that they can have careers in distribution or exhibition, an experience that Gutierrez also went through as a college student.

This reluctance for colleges to change up their film curriculum or viewpoint on what jobs exist in the industry is only one source of stubborness.

Another is in the fact that film is still Eurocentric. While some Latin American filmmakers like Guillermo del Toro and Alejandro G. Inarritu are able to garner Hollywood attention, the broader presence of Latin American films in America still needs some work.

To Gutierrez, this change can happen. He says he wouldn’t be in the career he’s in if he didn’t believe it was possible. Everything already exists for this change to take place, it just depends on if the industry allows it to.

Once again, we don’t have to reinvent the wheel. It’s already there.