Posted by Andrew Ronald at 9:55PM 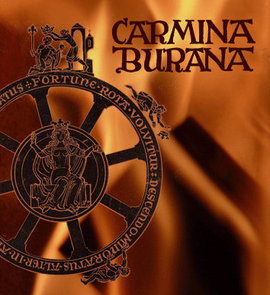 It's intense. It's powerful. And it will move you.

This is the music of Carmina Burana.

Seamless integration between sporadic bursts of energy, rhythm, and triumph, strung together by a haunting echo in the background define this style of music. And despite how startlingly demonic the music may sound, underneath it all, there is something still enchantingly reassuring about it.

Looking up to the lyrics to one of the more popular, well-known songs "O Fortuna," reassured me of this feeling. "…hateful life first oppresses, and then soothes as fancy takes it poverty and power, it melts them like ice." The music isn't meant to be malicious or intimidating...it's meant to be didactic. There's an enlightening truth behind the cyclical nature that defines fate. Carmina Burana's music is meant to serve as a vehicle for this message.

You can hear the music for yourself on Tuesday, April 2 at FLEFF's Concert featuring these particular pieces performed live at the Whalen Center for Music.

What do you interpret after hearing this music?