Posted by Rachael Lewis-Krisky at 2:45AM 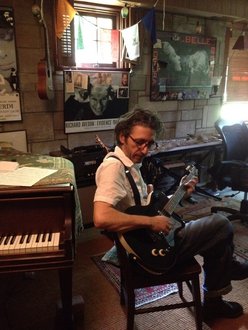 Robby Aceto is the guitarist of Ithaca’s Cloud Chamber Orchestra. From coplex rythms to ambient tonalities, the group has the innovative ability to tap into music through unique and creative styles. Aceto will be playing on Saturday as the group accompanies the historic film, Battleship Potemkin, live at Cinemapolis.

1. The phrase "color guitarist" has been used to describe you before. Can you explain what that means and how your work exemplifies that?

Several years ago someone in an interview said that about me; that I was a "color guitarist" and it sort of stuck. I think it was said in the context that I'm somewhat unconventional in my approach to the instrument. I've always been fascinated by the sonic possibilities the amplified guitar offers, far above and beyond its ability to simply project. Experimenting with those very flexible qualities for me always took precedence over what you might consider the more central concerns of being a guitarist, such as proper technique and learning a big idiomatic vocabulary.

Instead I've focused on using the guitar in ways I've found that serve my own approach to writing, especially in the realm of what might be referred to as "ambient" music. It's a fabulous instrument for that kind of improvisation primarily because of its sonic potential, but also because of the ease with which the character of the instrument can be altered by using different tunings. It can be approached with a lot of aggression and played very percussively, but also lends itself to making beautiful, soft, ethereal sounds. Add to that the fact the instrument has a very wide actual note range, especially when you use feedback,  and you suddenly have a lot of territory to explore.

2. Cloud Chamber Orchestra has been around for a long time. Has the band developed an unspoken connection, strengthening your abilities and proficiency as a group?

We performed as a group for the first time at FLEFF in 2008. Dr. Zimmerman knew us individually from other projects, and she is actually the one who originally made the suggestion we play together. A lot of things about our chemistry for that event sort of clicked and after FLEFF 2008, we decided to continue as a group.

Anytime musicians play together a lot, especially in an improvisational setting, there is going to be development of some kind. For Cloud Chamber Orchestra, I think the way we have developed most is in how accepting we are of each other's musical interests. I'm not sure people are aware that we are an improvisational ensemble. For us the real work has been to discover how to improvise as a group; how to make an ensemble sound that speaks to the strengths of each musician, and yet serves the film we are performing with.

I think there is a misconception among people who are not that familiar with films of the silent era; that they are all full of heavily made-up, oddly dressed characters, jerking around the set, bulging their eyes out and over acting. Nothing could be further from the truth. The great films from the silent era are deeply layered and immensely nuanced; capable of putting complex story and character across, without the bells and whistles and special effects of the contemporary film.

This year we are performing with what is considered by many to be one of the most significant, most influential films of all time: Sergei Eisenstein's Battleship Potemkin. To say it has been imitated, copied, and emulated by many of the "great" filmmakers would be a massive understatement. That it portrays one of the most pivotal moments in 20th Century political history, and tells it in incredibly personal and moving terms, and at the same time invents a visual language never before seen; well, this is obviously a film with a lot of context to deal with.

4. What are you most looking forward to seeing and attending at FLEFF?

The American Dissonance event at Hockett on April 1st is not to be missed. I'm in particular a great admirer of Deborah Martin and Jairo Geronymo. They are truly fabulous together. That show features works by several of America's greats: Gershwin, Copeland, Bernstein. Lots of great music!