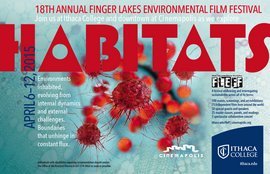 Flipping through channels with one hand, grabbing a blanket with the other one, and a bowl of popcorn on your lap.

A cozy night in.

‘A date with Netflix’ is perfectly fine on any day but a night in should be the last thing planned during FLEFF week in April.  FLEFF is also more than its visual component of showing films.  It includes concerts, lectures, workshops, discussions with guests, artworks.

A festival is about being a participant – letting go of the conventional need for something familiar and being open to a new experience.  Walking to Cinemopolis or to IC’s campus for FLEFF events in the cold, chilly weather of Ithaca, NY won’t be a regretful memory.  But you don’t have to take my word for it!  Countless people love and are loyal to this festival precisely because of how much it has to offer in such a short time.

FLEFF isn’t just an Ithaca College event or catered just for college students.  It’s an international film festival that brings together various viewpoints and perspectives for fresh and experienced audiences alike.  While FLEFF definitely has a global quality, it also builds a local community while sustaining an international one.

We all live in a place and have a sense of community, but it’s even more fortunate that Ithaca, NY hosts a film festival.  Festivals build a unique atmosphere and have a transformative power of making something more alive.  While viewing international films and events, festival participants can also be exposed to the local charms of Ithaca and embrace the location of this festival simultaneously.

The reason why controversial films such as gay women in the south or banned films in China can be seen at FLEFF is due to the commitment to the FLEFF mission of viewing sustainability through diverse forms, through cultivating different themes annually, and through the wonderful people who flesh out the FLEFF experience through marketing and programming.

So let the smell of fresh popped popcorn fill you up participating in FLEFF week rather than at home.  It's possible to be cozy while still doing something different - it's the best kind of spontaneous exposure!  April 9-12 will be a week prepped and pumped with exciting choices to make as to how to make the best memories.