Darkness Illuminated: How Music Makes a Festival an Experience

Posted by Hannah Basciano at 1:48PM 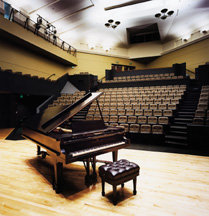 When I listen to music, I close my eyes.

With nothing but the inside of my eyelids to distract me, I can hear every note

as it interacts with its friends from fellow instruments. I can hear every stroke of every bow, every beat from every drum, every blow from every horn, and every chord from every key struck down in synchronization. The sound is a masterpiece.

FLEFF does not allow me this pleasure. FLEFF forces me to keep my eyes open

with such fantastic visuals, my lids absolutely refuse to close. With both my eyes and ears bombarded with art, my senses overload.

The masterpiece of sound becomes so much more with the addition of sight.

It becomes an experience.

FLEFF is known for these amazing musical experiences. Every year, the festival hosts an opening

These experiences are unforgettable, and not to be missed!

This year’s performances in particular will be outstanding… so why not attend them all?

On Tuesday night, April 7th at 8:15pm, the spectacular Hockett Recital Hall will be filled with the famous sounds of Carmen. The performance will include renditions of Carmen Fantasy, Carmen Fantasy Nocturne, Seguidilla, Habanera, and Bolero—and it is all open and free

The concert will incorporate beautifully played music with multimedia elements, as well as a live opera singer and dancer. You’ll be overwhelmed in the best way possible.

2.  The Crowd: Silent Film with Live Music by Cloud

With a change of scenery from the Ithaca College Campus high up on the hill, to the center of the Ithaca metropolis on the Commons, Cinemapolis will host a screening of King Vidor’s The Crowd on Saturday, April 11th,  at 7:00pm.

Chamber Orchestra, will bring to life the story of a man and woman married and struggling in a bustling, impersonal city through their instruments.

Tickets are on sale

3. The Torrent: Silent Film with Live Music by Fe Nunn and Friends

In Monta Bell’s classic silent piece, The Torrent, a young girl experiences heartbreak and successes in her travels

. Greta Garbo’s debut role could not be in better hands than those of the talented musician, Fe Nunn, and his fellow performers.

The film will screen at Cinemapolis on Friday, April 10th, at 7:00pm. Tickets are on sale

You will not want any of these performances to end, and you certainly will not be able to close your eyes!

Get ready, because in less than two weeks music, art, and film will combine into an experience.

Have you ever experienced silent film and music before? What was it like?