Posted by Emily Varga at 9:44PM 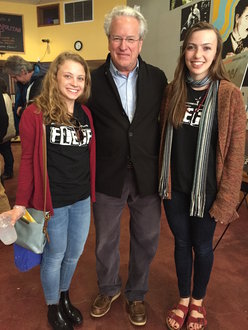 Jon Bowermaster visited Ithaca during FLEFF week to premiere his film Dear President Obama at Cinemapolis and I must say President Obama and everyone else should pay attention to this film.

Bowermaster created a film that functions as an advocacy platform to explore the negative effects of fracking and what we need to do as a society to better the environment.  His use of statistics, expert sources and celebrity power helped to make this film so impactful.  Not only was I moved, but empowered – Dear President Obama, please watch this film.

During my freshman year of college I took a sustainability class, which explored the negative consequences of fracking (drilling into the earth to extract natural gas inside of shale rocks).  Unfortunately, in order for this to happen we must inject the rock with our own chemicals, which in turn have negative effects on the environment.

Although the class did impact me, it was not until I saw this film that I realized how much of a domino effect fracking has.  The film addressed all aspects: environmental impacts, economic impacts, the impact on employment and much more.  Bowermaster used the human element, which evoked a lot of emotion – I felt myself tear up many times.  I just honestly could not imagine what it would be like to be living on land being taken over by fracking.

The discussion that followed Dear President Obama was what truly made this film my favorite experience at FLEFF.  Not only were there people in the audience who were actually in the film, but the audience as a whole was extremely engaged.  There were people on both sides of the aisle, unafraid to voice their opinions.

If people in a small town in upstate New York were able to contribute to the anti-fracking movement in New York State, then I can do just about anything (or at least that’s how I felt after).  I even had the chance to speak with Bowermaster after and I asked him a question that I felt many people would find interesting – what will happen to all of the people employed by fracking, should we turn to renewable energy rather than natural fracked gasses.

Bowermaster told me that this is an irrational fear and something many people need to research before they come to a conclusion.  Employment supported by fracking is temporary and unstable in that fracked wells can go dry and people who were once employed can be kicked to the curb.

Renewable energy is our most viable option at this time and after seeing Dear President Obama I feel well versed in the subject, and my own beliefs are more reassured.  In the year of 2016, approaching a presidential election - President Obama, you must watch this film.