Posted by Cassandra Moore at 11:57PM 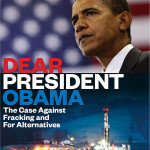 The theme of Jon Bowermaster’s film Dear President Obama documented the narratives and scenes of “fracking” industry within states across the United States. Bowermaster directed and wrote the script with actor Mark Ruffalo narrating. Before the film screening my own ideas and opinions on the highly controversial topic were locked in.

Ithaca and the larger Tompkins County community is viewed as the “Lion’s Den” within the eyes of large oil and gas corporations. I felt that. It also is known to have several key figures within the community who spearheaded the fight within New York state to ensure that the moratorium would lead to a ban. The audience was unafraid to hiss at former Vice President Dick Cheney’s face and cheered at friends who they recognized on screen discussing their experiences and knowledge about fracking.

It was not until the discussion did I turn around to see the elevated rows behind me full of the faces that were just projected before me moments ago. The quantity of people and the high level of enthusiasm that most people were sharing about this topic allowed for a rich discussion. Many people shared further insights and questions. Another added bonus that was key to many of the post FLEFF screenings was having a filmmaker be present with the audience to respond to their reactions.

Within that space there were many people that participated in collaborating to make this film as well as many people who have been long time supporters of the anti-fracking movement. More important than the documentary was the space that existed around it for people to come together again and react with others in the flesh.