Posted by Andrew Hallenberg at 2:10AM 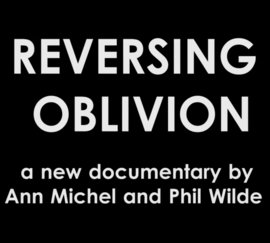 How do you rediscover family history that seems lost forever?

For the audience of Reversing Oblivion, it comes in the form of discovering a lost estate, and the family who owned it.

Last week, I had the most wonderful opportunity to speak with Phil Wilder, the cinematographer and co-creator of Reversing Oblivion. Philip also acts as the Co-President of Insight International, INC. A professional independent video production company that has been creating educational non-fiction videos since 1971.

Philip Wilde is the cinematographer of Reversing Oblivion, a documentary about trying to find identity. The documentary follows Philip and his wife, Ann Wilde (who as well acts as the Co-President for Insight International INC.) as they investigate Ann’s grandmother’s past amid the Holocaust, and an estate in Poland.

Philip is excited to bring Reversing Oblivion to FLEFF ‘18 because of Ithaca’s intellectual audience.

Philip says that FLEFF encapsulates the idea of non-preconception. This holds true especially for year's theme. For FLEFF '18, audiences will know nothing about the geographies they're stepping into. One day they're investigating the family history of an estate in Poland, the next day they're exploring uncharted Antarctic land.

“[pre-nociception is] walking into a room and not have an idea that you know all about the subject before you get there.”

For Reversing Oblivion, the audience is asked to step into the shoes of someone who’s past remained a mystery for the first thirty years of their life.

For Philip and Ann Wilder, the practice of filmmaking and radio has allowed them to rediscover family history that seemed lost forever.