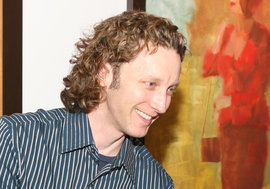 Co-curator of the Distributed Microtopias Exhibition, Professor Dale Hudson has been working extensively with FLEFF since 2007, translating each season’s theme into a cohesive body of work. Partnered with Sharon Lin Tay, the duo has worked with artists from all over the world.

“In some ways, this year's exhibit responds to the techno-utopianism or cyber-utopianism of the the mid-1990s that imagined the internet as a democratic space where information and knowledge could be distributed equitably to everyone without being utterly naive or indifferent to the built-in controls of these technologies and platforms,” said Hudson.

The Distributed Microtopias Exhibit is a learning and sharing experience for the artists and the curators. This season will be an unusual one as artist Rico Aditjondro selected Null_Sets, a collaborative piece with an Ithaca alum, Evan Meaney.

It is often challenging, said Hudson, tackling key concepts for each piece and presenting them in this “transcultural space.”

“Each piece in the exhibition can be experienced individually, but the exhibition works even better as a whole.  Many of the pieces address similar concerns from different perspectives,” said Hudson.

Hudson also utilizes the Dérive app in exploring his own environmental spaces at the New York University of Abu Dhabi, where he teaches film and new media studies, and connecting it to the theme of FLEFF.

“Connected to FLEFF's theme, the Dérive app facilitates research into the mobilities of urban planning that shape our experience of everyday life.  Many of the concepts behind the design of the city were derived from British colonial ideas of space transmitted through and refashioned by postcolonial Egyptian ideas of space,” said Hudson.