Posted by Nnebundo Obi at 2:31PM 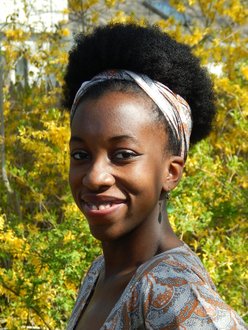 Home to numerous trumpets, notes, posters, Dr. Witek’s office is typical of a music professor’s office.  “Did you know that professional classical symphonic trumpet players usually own and play between five to six different trumpets?”, Witek states. He generously demonstrated the unique sounds of the trumpets perched on gilded holders neatly arranged on the floor of his office.

Witek sees his calling as not simply teaching trumpet, but rather working with students to be well rounded. Witek jokingly states “I tell people that I don’t teach trumpet, I tell them I teach humans. A trumpet is a tool that I can use to help my students grow professionally and personally.”

Originally from Buffalo, NY, Witek’s passion for teaching and trumpet playing has taken him on trips and collaborations both domestically and internationally. As an educator, Witek strives to help students find their passion, He states “I help people find their niche, develop skills in other areas like sound design, recording technology…really any of those skills carry over to anything they do.” He teaches a weekly pedagogy and repertoire class, trumpet for music majors and coaching ensembles.

In the trumpet class, he teaches music education majors how to play the trumpet. He teaches between 12-15 music majors weekly hour lessons. Witek explains that it is important for music education majors to have a working understanding of the trumpet even if it is not their primary instrument. Lastly, he coaches chamber ensembles, which are small performing groups that consist of between five to eight players that perform without a conductor. Witek works with these groups to learn playing techniques, communication skills and rehearsal hacks to enable them to play without a conductor. At the time of this interview, a Whalen School student delegation and Dr. Witek competed at the National Trumpet Competition in Lexington, Kentucky on Wednesday, March 3rd.

This is the year is Witek’s first time participating in the FLEFF concert. He will be performing a comedic duet titled “Do You Mind” by composer Craig Ross with Dr. David Earll. Witek is looking forward to performing this piece because it incorporates some acting. The premise of the performance is that the tuba player keeps interrupting the trumpet player, it sounds quite serious but it will be a humorous performance. To prepare for the concert, he and Dr. Earll learn their music and stage directions separately. Witek states “as a performer, as an artist you have to be an actor as well. Even a painter painting must tap into the emotions that he is trying to capture on the canvas.”

Witek wants people to know that

1. Trumpet players buzz their lips as though they are blowing raspberries, they do not blow into their trumpets.

2. Classically trained trumpet players know how to play between five to six different types of trumpets because each trumpet plays in a different key.

Dr. Witek is excited for his first experience at the FLEFF festival, he believes that FLEFF “exposes people to different creative ideas, impacts business and opens up the college to guests who see the first-hand effects of what a nodal point like FLEFF has to offer.”