Expanding on the Theme of Dissonance with Brett Bossard of Cinemapolis

Posted by Kimberly Capehart at 4:50PM 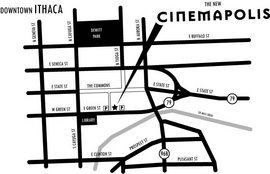 A map of Cinemapolis on the Ithaca Commons

Last week, my fellow blogger, Kayla Reopelle, interviewed Mr. Brett Bossard for an in-depth Q&A blog. I followed up with him this week, downtown in the warm lobby of Cinemapolis as the wind howled outside, to get his take on the festival's theme of Dissonance.

"I like to think of [Dissonance] in terms of cultural dissonance. It's important to recognize [cultural dissonance] because we're living in a time where we have a 24-hour news cycle and people are constantly talking about the culture wars that are being fought. I think cultural dissonance is a "chicken or egg" situation: is it the result of the culture wars being fought or is it the cause of those culture wars, is it what's driving this feeling people have of their ways of life and their belief systems being endangered? I don't know if it's technology that is making us more aware of the differences in how people choose to lead their lives. I definitely think that technology helps to break down some of the economic barriers that separate people and allow more people to broadcast their individual messages. There aren't as many impediments to someone across the world seeing whatever you have to say. I think, in part, though, that this is also driving a sort of fear or discomfort that people have regarding cultural dissonance.

Drawing largely from his experience as Executive Director of Cinemapolis, a position he acquired in August 2013, Bossard added:

"I think film, [as a technology], is a great way to engage with other people. One of the things I love about film is that it's one of the most accessible art forms: people who might not feel comfortable going to a play or to an art museum usually have no problem sitting down in a movie theater. That kind of accessibility is great because once you have people sitting in a theater, then you have their attention, and you can use film challenge them. Also, movie theaters are safer spaces [for challenging opinions] because they're dark and so your reactions are your own and you don't necessarily have to share your experience with the people around you, even though they're experiencing the same thing at the same time. Seeing films communally is one of the most important aspects of a festival and it's the best way for directors and activists to get their message and their argument across to an audience.When you share an experience that challenges your ideas with others, it eases the dissonance that all of us experience: it can almost bring us into a state of consonance."