Posted by Mira Moreau at 3:01AM 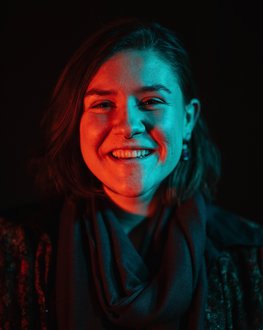 I guess that’s pretty normal nowadays, but hearing the piercing passion take over my father’s voice every time he gets on the topic of politics is kind of amazing. Dave Moreau would tell you that Trump has disrupted everything, from environmental policy, to the way men think they can treat women, to the amount of trust a citizen can put in their elected officials.

Dad, you didn’t know it, but you’ve been preparing me for FLEFF this whole time.

The theme of the 21st FLEFF is DISRUPTIONS. This theme excites me because in one word, it extends an invitation to the audience to ask themselves, how is it that society is supposed to work? What is causing society to succeed, fail, or change its course? How can you disrupt your own thinking and consider a new perspective?

A topic my father brings up a lot lately is the Mexican-American border wall. He talks about how the landscape of the desert would be highly disrupted if a wall was built there. If natural run off routes are disrupted, land could flood. If the wall goes through protected Native lands, treaties could be violated.

Best of Luck With The Wall (Variant) was part of the Invisible Geographies New Media exhibition for last year’s FLEFF. This 34-hour video shows visuals of the entire Mexican-American border in order to give scale to the disruption a border wall would cause on both land and people.

Aerial footage is not inherently political. However, the artists found the politics surrounding the wall debate disruptive enough that they had to make art. This project works through a marriage of disruptive politics and visuals that directly deconstruct the notion that a border wall would be a simple task to complete.

Best of Luck With The Wall (Variant) leaves me feeling ready to digest this year’s programming. It is a reminder to not only look at how art is used to disrupt an audience, but also look at what’s going on in society that’s inspiring the art.

Next time my dad starts discussing Trump, instead of brushing him off in an attempt to avoid conflict, I will welcome his discussion. Through disruption comes new ideas.