Feeling, Seeing, and Hearing at "The Concert for Microtopias"

Posted by Isabel Galupo at 5:33PM 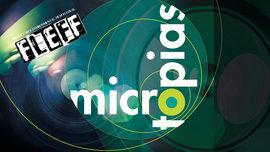 The fourth act of the concert was a performance of Langston Hughes' "Theme for English B" by Ithaca College theatre professor Cynthia Henderson.

In the poem, Hughes contemplates his existence while brainstorming for an English assignment; he says,

"It's not easy to know what is true for you or me at twenty-two, my age. But I guess I'm what I feel and see and hear."

At "The Concert for Microtopias," I saw lush, beautiful fabrics draped across the stage and talented performers extremely dedicated to their arts. I saw real-time footage of the audience compiled with brightly colored digital projections, all manipulated during the concert.

I heard heated conversations between two pianos, perfected vocal inflections from seasoned actresses, timeless wisdom from poetry, and the emotions of a trained baritone.

At "The Concert for Microtopias," I felt moved, inspired, and-- at times-- a bit conflicted by the sheer variety of experiences that washed over me in a mere hour and a half.

At "The Concert for Microtopias," I saw, heard, and felt FLEFF; according to Mr. Hughes' poem, I was FLEFF.

What image, piece of music, poem, or emotion stuck out to you the most during "The Concert for Microtopias?"