Posted by Edward Willshire at 11:45PM 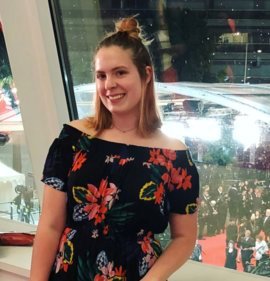 Walking down the streets of Cannes, France, FLEFF Blogging Intern Kristen Reid caught a rare opportunity inside of an already rare opportunity. She had been selected for the “3 Days in Cannes” program with the Cannes Film Festival and had arrived a day ahead of the sponsored screenings.

“I have two tickets; do you want them?” Reid’s ears perked up as she heard a woman nearby make this offer to another pedestrian.

The pedestrian kindly turned down the offer, “Oh, I'm not with anyone. I'm by myself,” and Reid stepped in.

“I'll take the other one!” She exclaimed, claiming one of the two tickets the women had offered.

With only a few minutes to spare, Reid had to rush into an outfit that would fit the iconic red steps of the main Cannes theater. She had only heard about her acceptance into the Cannes student program a week earlier, so rushing around was the theme of the trip thus far.

Rushing turned to waiting on the first actual day of the “3 Days in Cannes.”

"Wake up at eight o'clock, go sit in line for two hours at least in the morning, watch a movie, go to a line, wait for two hours, see a movie. Just like that for three and a half days." Reid described. As packed in as it was, Reid’s Cannes experience was the perfect festival immersion to prepare her for being a FLEFF Blogger.

Prior to Cannes, Reid had only a limited experience with film festivals. Along with her six siblings, Reid moved to Ithaca when she was 15, enrolling into Ithaca High School. She had traveled a lot growing up, previously living in Maryland, Rhode Island, and Connecticut, but had finally found herself at home in a city as enamored with film as she was.

A self-described cinephile, Kristen knew she was lucky when she discovered Cinemapolis. “[It] is such a privilege to have in town, and especially to have a festival,” said Reid who, despite living in Ithaca, only learned about FLEFF during her senior year of high school in 2017. The only year in the last twenty the festival was on hiatus.

As a first-year student at Ithaca College (IC), Reid was able to experience FLEFF first-hand. In Dr. Matthew Holtmeier’s mini-course, Reid got a brief lesson in the history of film festivals. She was able to attend four screenings and one hour of FLEFF Lab Friday.

Overall Reid felt that she was encouraged to, "explore it on [her] own." She feels this approach is good for FLEFF in general, as it is a festival that invites full immersion, but that it left her wanting more.

Despite living in Ithaca longer than the average first-year student, Reid revealed, “I still didn't really know about it much.”

"Going to Ithaca High School there was never any information about it. Not even posters or anything. Which is interesting because you would think high schoolers would be into that especially since it's right there." Reid remarked, "especially in Ithaca, kids are really involved, and they're smart and thinking about stuff on a deeper level at a young age."

Reid was also fair to acknowledge that for FLEFF to appeal to high school-age students or younger, it may have to change. She added, “I don't know if it's a problem that they have.” FLEFF conversations are usually very nuanced and challenging. Appealing to a younger demographic may require making certain concessions that would alter FLEFF’s identity as a scholarly festival.

As FLEFF 2019 approaches, Reid has been reflecting upon her two different festival experiences with new eyes.

Cannes is a market-driven festival. The films that generally make the biggest splash at Cannes are those that will likely see a lucrative distribution deal and already have big industry names attached to them.

Reid compares this to FLEFF. As an environmental film festival it's, “about talking to people and it's about having your own ideas to bring to the table.”

As a cinema major, Reid wants to make a career out of talking about film and exploring the ideas that film inspires. FLEFF is the perfect environment for her to continue that journey.

Reid elaborated that FLEFF isn’t only about bringing your own ideas, “but also knowing that you're going to have 18 other people with 18 other ideas in the room and accepting that it’s a conversation and not just, ‘this is how you save the environment. Period.’”