Posted by Andrew Ronald at 7:49PM 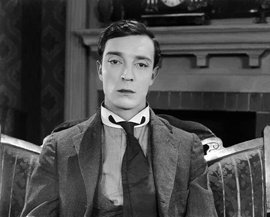 Attention all cinephiles! The FLEFF 2012 Film Descriptions and Trailers page is up!

Now of course every film that will be screened during FLEFF week is fantastic and everyone should come see as many as possible, but here is just a laconic list featuring the top five movies I am most excited for:

Can creativity really solve anything? This documentary directed by Doug Pray draws on a struggle any artist can relate to: finding inspiration. Creating a dynamic binary between the advertising industry and the most influential creative visionaries of our time, this film aims to expel the stigmas associated with a supposedly "manipulative business." And it has a really pretty movie poster.

Calling all film enthusiasts! If you never got the opportunity to see the infamous "stoic man" of the 1920's on the big screen, then head over to Cinemapolis to check out this cinematic classic. Specializing in vaudeville comedy and dominating the silent film era, Buster Keaton proved that shorts could be just as satisfying as feature-length films, all while hilarity ensues (even in something as simple as Keaton's desperate flight from the police in his short Cops.)

"A whimsical comedy featuring a shoeless fairy and the hotel night clerk." With a description like this, how could you not want to see this movie? Through this film's jovial narrative, a seemingly realistic atmosphere manifests into a fantastical romance. Spoiler alert: the fairy can grant wishes too!

Let me clarify: I didn't pick this film just because it's about one of my favorite cuisines (although it certainly did help me refine my list). The film traces the origin of sushi back to Japan, as I'm sure you all already knew, and documents the evolution of this delicacy in its attempt to please the hungry public to something as mass-producing as fast food restaurants themselves. This transition, however, occurred with such celerity that it upset the ocean's ecological balance, and this issue is touched upon as well.

Brought to you by the director of 4 Months, 3 Weeks and 2 Days, the film marries elegance and drama by integrating the all-too familiar issue of marital infidelity into the narrative. The husband has a clandestine affair with his daughter's dentist and must now choose between this unstable, yet exciting relationship with his lover and the stable romance he has shared with his faithful wife for ten years. Emotional. Sensational. Engaging. Go see it.

I wish I could have written about every film as they all sound exciting and satisfyingly establish their own microtopia, but I am more interested in knowing which movies you FLEFFers are most excited for!