Posted by Sam Stahnke at 9:34PM 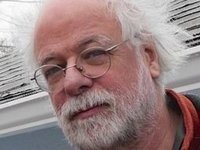 Experimental filmmaker Vincent Grenier stated that his work looks at "the unexpected linkages between form and meaning."  The unexpected occurs often in Grenier's work.  He diverges from the forms most films I see follow.

1.) The presence of depth establishes itself as a given in films shown in both multiplexes and art theaters.  Grenier plays with the concept of depth in the cinematic image.  In Watercolor Grenier removes depth from an image of a pond's reflections.  A woman sitting next to me described the images as "moving still-lifes."

2.) Grenier explained that shifts occur in the level of abstraction.  In Watercolor the abstraction escalates before reiterating the earlier image of the water's reflections.

3.) In Grenier's films the image changes in a deliberate, subtle manner that tends to fly under the brain's radar.  One only becomes aware of the image shifts in retrospect.

4.) The films unfurl at a purposefully slow pace.  But Grenier pointed out that tension could build up in a static frame.  For instance Grenier used discordant sounds of cars to act in counterpoint to a single shot of a forest.

5.) A lazy street, a red chair and graffiti.  These pieces of the everyday often take center stage in Grenier's work.  People play a peripheral role.  Grenier takes the focus of narrative films and pushes it to the side.

How has FLEFF changed, affected or informed your idea of media, arts and or music?