Posted by Cindy Yong at 5:48PM 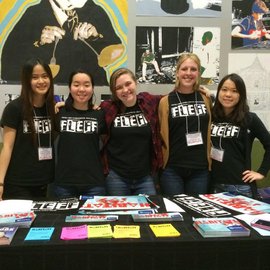 At the beginning of FLEFF 2015, I felt out of my element.  In the cinema world, I’m used to reaping the benefits of filmmaking.  But these past few months, I participated in actually helping a film festival run smoothly.  I created a public space for discussion about the diverse FLEFF events with these blogs.

I value the inter-disciplinary connections FLEFF creates and cultivates for any audience.

I attended my first silent film live music event.  From Patrick Grossi, I learned about urban housing problems in Philadelphia.  I participated in the book launch of City of Spies.  I exposed myself to Chinese banned films while learning about film distribution.

With these events and many more, I saw how an environmental term like ‘habitats’ reaches beyond scientific meaning to tie in with sociopolitical, cultural, economic aspects.  Beyond my own feelings of a habitat, I learned what habitats meant to other people.  Sorayya Khan mentioned how she thought people had their own “story-homes” built from their background, culture, and memories.

FLEFF prepared me for dialogues outside my knowledge. My confidence and interviewing skills increased.  I started to crave to find out about what was important to an individual for a meaningful story.  I consider myself a good listener, but FLEFF made me utilize those skills to the maximum to further conversations.

At the end of FLEFF, I realized why I was so nervous about participating in the blogging team.  I was the sole person placing these inhibitions and doubts, which tampered with my confidence.  Just as a film festival has to adapt to changes, I proved I’m willing to handle anything, so long as I remain open-minded.

Not all those who wander are lost. –J.R.R. Tolkien