Posted by Jackie Marusiak at 6:55PM 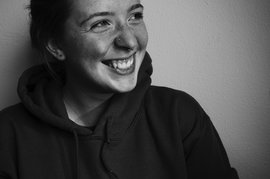 Looking back on my experiences at the 21st Finger Lakes Environmental Film Festival, I’m so grateful to have my mind disrupted and expanded on so many topics.

As a documentary student, nonfiction presentations and films excited me especially. Three events during FLEFF 2019 gave me insight about nonfiction’s innumerable forms and uses.

The Eyes on ICE presentation by FLEFF’s opening speakers from WITNESS, Palika Makam and Diana Rosa, informed me about why video footage is so important in human rights cases.

In Textor 101, packed with students, faculty and staff, Makam and Rosa presented the work they do at WITNESS, training communities to submit video evidence to obtain justice. The Eyes on ICE project collects video evidence to fight immigrants being deported in the age of Trump.

Although I knew that video footage is very important to criminal investigations, I never considered anything other than security footage would fit into that category. Makam and Rosa’s presentation disrupted my thinking about the uses of video in human rights and citizen journalism.

Friday’s FLEFF Lab session Disruptive Environments: Political and Other Ecologies allowed me to engage with creatives and their work processes. The conversation that ensued between artist Tony Cokes and filmmaker Jacqueline Goss about use of sound especially stood out to me.

Cokes said that “sound works on the back of the brain” and acts as a method for encoding history. Goss added that sound contributes to the third text of a film, a discernible voice and point of view the film holds that the audience must decode.

As someone especially interested in sound and use of sound in media, their conversation emphasized how powerful sound can be in a work of art.

On Saturday at Cinemapolis, Jacqueline Goss’ films Failing Up and The Observers showcased her wide range of ability as well as the wide nonfiction film genre.

The quick, rhythmic style of Failing Up, synced with audio from Home Alone 2, delighted me in its inventiveness. Goss revealed that while shooting skyscrapers in New York City on film, she actually laid on the sidewalk to get some of the angles.

The Observers, very stylistically different, is an observational documentary about the weather crew that continually collects data on top of Mt. Washington in New Hampshire. The steady, contemplative and soothing pace of the film combined with motifs of loneliness and inevitability of time spoke very powerfully to me.

Experiencing the power of FLEFF and its guests to teach me new things, disrupt my preconceptions and feed my documentary cinephilia, I can’t wait to do it all again next year.