Posted by Jessica Competiello at 12:33AM 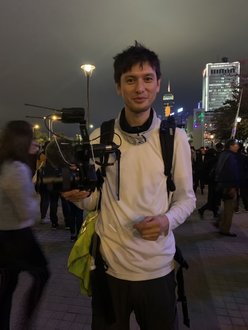 How often do people take a leap of faith and follow their passions? That is exactly what William Takahashi did when he put his career on pause and booked a last-minute flight to Hong Kong.

What started as a spontaneous, personal trip for Takahashi, has now turned into a full-length documentary film named Frontline about the Hong Kong student protests that will premiered at the Finger Lakes Film Festival 2020.

When he took his first trip to Hong Kong, Takahashi had no intention of capturing footage for a full-length film. He was there for his own interest, to bear witness to the passion of people fighting for something they cared about and to create a small personal project.

However, he quickly discovered the passion and spirit in all the people he crossed paths with in Hong Kong and realized he wanted to do something more meaningful. He explains “I kept meeting more people who would give me more of their time so the weight of expectations to tell their story and really do something with it…I just felt like I couldn’t let them down.”

Being in Hong Kong and witnessing the city’s energy and protests first hand, Takahashi explains the deep feeling of love, community, and spirit that were present everywhere he went. “People were opening up for each other in this time of intense need. I was overwhelmed by how much people were willing to do for each other. I have so many examples of people giving and not thinking of themselves.”

These stories included all the different ways people are doing their part for the movement who are not the people fighting on the frontlines that the news focuses on. These are the people who are the "aunts and uncles" of the students fighting picking them up and driving them to where they need to go.  People providing meals for the protestors so they eat. Graphic designers giving their time to create flyers and promotional materials for protests.

Takahashi recalls a story from the night he was tear gassed at a protest that a local restaurant owner offered him and his team water. Once he closed his restaurant at 2am, he drove everyone home, a commitment that took over two hours.

These are the stories and spirit of the people of Hong Kong that inspired Takahashi to take all of his footage and make something more out of it.

He has partnered with Rikun Zhu, a very accomplished Chinese film director, producer, and film festival curator, to be the editor of his project.

Together they have turned Takahashi’s footage into a story that follows the life of a university student with his team of protestors and a pet store owner who sells gear to student protesters. “The idea is that people can get a feeling of what a day of protest feels like, before, during, and after.”

Takahashi wants his film to provide a window into what is occurring in Hong Kong. “My biggest goal would be to create some kind of living document that the people back in Hong Kong that helped me would feel like it is a worthwhile result for the help they gave me and that the people watching it get to see glimpse of what they might not see in the news.”