Posted by Brian McCormick at 10:41AM 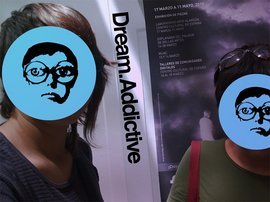 Tijuana based new media group DreamAddictive will be at FLEFF this Tuesday, April 12th in Business 104 at 7:00pm (on campus, FREE) for "Activist Retooling Fourfold," along with Elvira Dyangani Ose, Monica Haller and Sarah Wylie.

DreamAddictive is a collaborative partnership that began in 2003 between Leslie Garcia and Carmen González.

As quoted from their FLEFF bio: "[DreamAddictive's] work explores technical skills coming from the field of applied sciences, like physical computing, visual programming, hardware production, articulated through art and design, to create responsive environments and situations that play with the limits between the oneiric and the virtual."

DreamAddictive "works under the Open source philosophy as a way of sustaining and distributing the knowledge produced from research in working with multiple means." (taken from the DreamAddictive website)

One of their recent projects is OpenSolarCircuits, which is a project which works as a collective construction framework, systematizing the knowledge obtained during the research process so as to be later reproduced in different contexts. The project focuses on experimenting with sustainable electronic circuits, thus generating knowledge networks and tools for urban interaction.

Their work has been shown in diverse contexts: virtual happenings through the Internet; festivals; solo and group exhibitions, as well as live acts and audiovisual improvisations. DreamAddictive is the recipient of the grant PECDA “Creadores con trayectoria”,and the grant Fonca “Jóvenes creadores."