FLEFF Diary: Even the Rain, The Last Laugh with live music, and meet ups with FLEFF guests!

Posted by Brian McCormick at 10:39AM 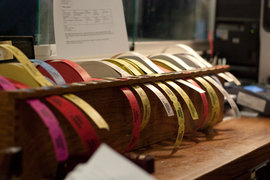 The last two nights have been very exciting for FLEFF! Now that the Cinemapolis screenings are underway it feels everyone has really gotten amped up!

The crowds down at the theater are very lively and energized. Every post-screening discussion has been full of energy and passion, since these issues and ideas are so important to the filmmakers and their audience. That's what makes seeing a film at FLEFF so unique -- the chance to talk to the filmmaker after the viewing.

Thursday night I saw "Even the Rain", a fiction feature film about a Spanish film crew making a movie in Bolivia amidst the Water Wars. In the film, the director casts a local Bolivian to play a major role. He soon finds out that this local is one of the prominent activists fighting for water and his rebellion throws the director and his crew through the biggest obstacles imaginable. I personally loved this film -- it really showcases the passion and determination put into filmmaking, as well as the passion of the locals to fight for water and essentially their lives.

Attending the screening was the film's casting director Rodrigo Bellot, an IC alum who it has been an absolute pleasure to have at FLEFF. Following the screening, Bellot conducted an enlightening Q&A, and he also spoke at the "How to Get Your Break" panel discussion yesterday evening.

Bellot will be at FLEFF again today -- don't miss the chance to meet him and the other FLEFF guests!

Last night, I then saw F. W. Murnau's "The Last Laugh" with live music performed by John Stetch. Really incredible. It felt very experimental in the way he would transition from scene to scene by isolating one sound or bringing a new one in, or just by changing the way he hit the drums or which keys he played. Keep in the mind the movie's original soundtrack is composed of an entire orchestra -- Stetch performed it by himself!

There will be two more silent film screenings with live music performances: Tonight, 7pm "Siren of the Tropics, and Tomorrow, 7pm "Storm Over Asia."

"Even the Rain" will also be screening again today -- go see it if you haven't!

Also, don't forget to head down to Delilah's for the after parties if you want to chat it up will all of the FLEFF guests!