Posted by Brian McCormick at 10:34PM 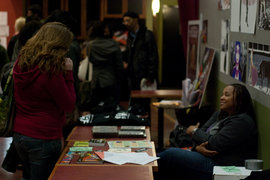 Yesterday I saw "Mississippi Damned" a phenomenal two hour look into the life of the film's writer and director Tina Mabry.

Mississippi Damned is one of the most honest films I have ever seen. It is "fiction," but, as Mabry declared to us after the screening, "95% is true." It's almost unimaginable how so much could be true. I think that is part of what makes it such an incredible film.

The movie begins with Mabry's family and friends in the '80s in a rural Mississippi. We follow them into the 90s during which we see all of the enormous hardships that these families face amidst their lives of poverty. This is Mabry's story, her personal account of everything that happened in her life, following interpretations back to when she was just a little girl.

It was a great pleasure being able to listen to Mabry talk after the screening and to ask her questions in person. Considering the emotional content of her film, Mabry warmingly offered a hug to anyone needing one after viewing the film. When asked about what it's like for her to watch the film over and over again, she describes it as having been a very therapeutic process. I can only imagine the courage it takes to show the world all of your life without holding back.

Mabry is a very strong and very driven person -- I know I will not hesitate to see her next film. Mississippi Damned is a brilliant example of how successful a story can be when you make it personal. I hope everyone had the chance to see it, and if not, get the DVD!

I hope you all have been enjoying FLEFF as much as I have, feel free to share what you've done and your thoughts on the films!