Posted by Lydia Lepinski at 12:56PM 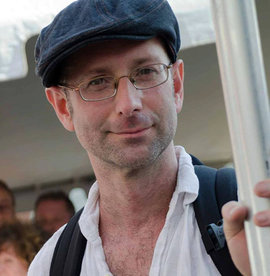 Before FLEFF got cancelled due to the COVID-19 pandemic, I was able to chat with Richard Shpuntoff over Skype.

Richard Shpuntoff, a filmmaker and journalist, currently resides in Buenos Aires, Argentina. When I Skyped him, he was sitting in what appeared to be an office with a large book case behind him. The door to his balcony was open and I was able to hear the vehicles on the street below.

Mr. Shpuntoff is a consultant to the Cinema Museum of Buenos Aires. For FLEFF this year, he was helping with the programming of Federico Valle’s 1929 silent film For Argentine Lands, which had been lost for many years and was recently discovered in the museum’s archive. The screening of the film was to have two live actors and a live music performance alongside the film.

For Mr. Shpuntoff, it was interesting taking on the role of the director and having control over the message. He describes, by writing a script and adding live music to the film, they have infiltrated the film by creating a vision they want the FLEFF audience to see.