FLEFF FILM: OF FATHERS AND SONS 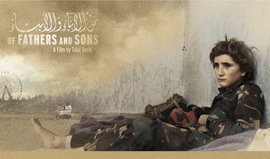 Terrorists always start out as children.

This year’s FLEFF theme is DISRUPTIONS. One of the films that will be shown downtown disrupts the typical coming-of-age story mold.

Set in northern Syria, Of Fathers and Sons is an Arabic-language documentary that follows Osama, 13, and Ayman, 12, as they are motivated by their radical father to let go of their youth and become jihadist terrorists.

Director Talal Derki grew up in Damascus, Syria before moving to Athens, Greece to study film. This is the second documentary feature he shot in his home country, the first being Return to Homs (2013).

Derki pretended to be a Jihad-sympathizing photojournalist in order to gain the trust of Osama and Ayman’s family. Between the summers of 2014 and 2016, he spent more than 330 days documenting their lives. No one, not even Derki’s cameraman, knew that Derki was not a Muslim.

“If they had just one doubt, I could've been destroyed,” he said in an interview with Vulture. Two and a half years later, he’s still recovering from that constant fear. He even tattooed his wrist, a forbidden practice in Islam, so that he can never return to the terrorist front.

To investigate how violence is passed down from generation to generation, Derki knew that he must immerse himself in this extremist environment.

Of Fathers and Sons has been well received in Arab society as a critique of jihad, masculinity, and the family relationship. It won the World Cinema Grand Jury Prize Documentary at the Sundance Film Festival and was nominated for Best Documentary Feature at the 91st Academy Awards.

I’m eager to watch Of Fathers and Sons so I can learn more about how a childhood surrounded by terrorism can shape the ideologies of future generations. I’m appreciative that I’ll be able to view the perspective of radical Islamists because Derki risked his life to make this film.

Of Fathers and Sons will be screened at Cinemapolis, 7pm on Wednesday, April 3rd, with a discussion to follow.