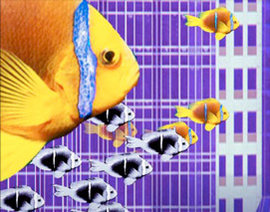 It's so weird to think that FLEFF has been around for four years, let alone fifteen.  And so much has changed since FLEFF 2008!  We had a different president, The Dark Knight hadn't premiered yet, and I had no idea where I was going to go to college. (Spoiler alert:  I chose IC!)

So looking at information and schedules from past years of FLEFF, I was expecting to see a lot of differences.   You can find the website for FLEFF 2008 here, but here's a quick rundown of the differences between FLEFF 2008 and FLEFF 2012.

It's cool to see how FLEFF has progressed over time.  With FLEFF celebrating its fifteenth year anniversary this year, FLEFF has taught us about so many topics, ranging from environmental issues to electronic music to the science of food. This only makes me more excited for this year's events!