Posted by Edward Willshire at 10:34PM 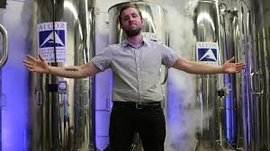 In the weeks leading up to FLEFF I wrote two blogs about the work of experimental video artist Pawel Wojtasik. His first feature-length documentary, End of Life, puts the audience face-to-face with death by presenting the lives of individuals going through the process of dying. It is an intimate and emotional story that deals with the inevitability and acceptance that life is finite.

In a fittingly disruptive fashion, Frozen Faith shows a group that challenges the entire notion of mortality. The 23-minute documentary produced by Vice News explores the fascinating yet questionable field of cryonics.

Cryonics is the process of freezing part-of or the entirety of a living organism on the assumption that if the tissue can be preserved long enough it will one day be reanimated leading to a cheat for death. Frozen Faith shows the inner-workings of two cryonics labs, one in Oregon and one in Arizona.

While cryonics is considered by many in the scientific world to be a pseudo-science at best and a complete scam at worst. Frozen Faith does a good job of shining those in the field in multiple lights. Most of the film is spent with the individuals who strongly believe that cryonics is not only a potential game-changing scientific achievement but also a moral one.

One individual in the film, Max More, states that he believes death isn’t a natural process. His work in cryonics as the President of Alcor Life Extension Lab in Scottsdale, Arizona, is motivated by his belief that cryonics is an extension of emergency medicine. Throughout the film, More and others working in the field refer to the individuals they freeze as “patients.” Even though to be frozen you must be pronounced legally dead.

The film shows the skepticism of cryonics as well. The procedure at one facility costs $200,000 for a full body freezing, and as one scientist points out, there is heavy doubt that the actual science of how to reanimate a frozen deceased person could exist.

This short screening came with an equally interesting discussion led by Julie Boles, Assistant Professor at Ithaca College in the Department of Health Promotion and Physical Education. She repeatedly reminded the audience that other major scientific developments like cloning were pure science-fiction until only the recent decades. While most of the audience appeared to side with the idea that cryonics is a borderline scam, possibly with malicious intent, the film and Boles’ commentary left the door to the idea open to me.

The film, and cryonics if one day the science does progress, is a major DISRUPTION to the narrative I entered FLEFF week with.

I’m looking forward to once again exploring death when I finally get to see Wojtasik’s End of Life in full on Saturday, April 4 at Cinemapolis. I anticipate another disruption of my conception of death when I see his film and I hope many other ideas develop in the same way as I attend more screenings.