Posted by Mira Moreau at 7:59PM 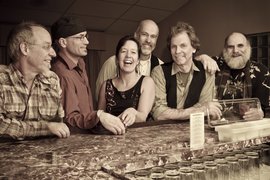 Just another Friday night at FLEFF.

Last week, I spoke with Dr. Gordon Rowland, a professor in the Communications Management and Design department and a member of the zydeco band Li’l Anne and Hot Cayenne. The group will perform live accompaniment to the film Salomé at this year’s festival.

Gordon assured me that if there’s anyone to talk to about Li’l Anne, it’s the frontwoman who gave the band its name. That’s fellow IC professor and his wife, Dr. Anne Stork.

“She’s got it. She understands the genre.”

Zydeco evolved in the early 1900s from Louisiana French Creole speakers. The rollicking music requires “looking at the dancers, feeling what their mood is, seeing what they’re responding to, and reacting to it,” Gordon explains. In this performance, however, Anne will respond not to a dancing audience, but to the film.

Salomé (1923), is about John the Baptist’s execution at the request of King Herod’s stepdaughter. Highly stylized costumes and exaggerated acting give it its distinctive atmosphere. The band plans “to play opposite of it, to have interplay with it” in order to give the audience a more disruptive experience.

“It won’t be locked the way a soundtrack is locked, it’ll be much more interactive,” says Gordon. “There’s no setlist when you show up to a dance.”

Salomé, accompanied by Li’l Anne and Hot Cayenne, will play at Cinemapolis on Friday, April 5th at 7:30pm with an introductory performance by IC acting professor, Jennifer Herzog.