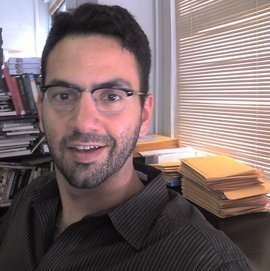 Among the films at this year’s Finger Lakes Environmental Film Festival are two from Kino Lorber Films. Both Taxi and Mountains May Depart will be screened at FLEFF accompanied by the presence of Ithaca College alum, Rodrigo Brandao.

Brandao, who is Vice President of Marketing for Kino Lorber, stressed the importance in thinking of global cinema as art.

Born and raised in Brazil, Brandao experienced his first time abroad when he ventured to Ithaca College in 1997. He double majored in Cinema & Photography and Art History.

“A lot of people in this business have different backgrounds,” said Brandao. “That’s what helps them find their niche.”

While he may have found his niche at Kino Lorber, he also owns a smaller film distribution company called Cinema Slate. The company specializes in foreign art cinema but mostly Latin American work. His endeavor is still new and therefore he acts as President and the only employee of the company.

The site currently features Brazilian films such as Casa Grande, a film that follows a young boy’s dawning sexuality and the social hierarchy of Brazil.  Sunday Ball, another film featured on Cinema Slate, is a documentary that focuses on the soccer culture of Rio de Janeiro.

“It’s a way to play to my strengths and get in touch with my roots,” said Brandao.

Last year, Cinema Slate released six films on platforms such as iTunes and Netflix. Since Brandao represents as the sole organizer he has had to do everything from booking the films to dealing with the technical issues he wouldn’t normally attend to.

Brandao claims he has learned a lot through the process of running his own company. He wants to continue to give Latin American and foreign films a platform they deserve.

“In the future, I’d love for it to grow and become a stable company,” said Brandao. “I would love to take the films to more places and expand.”

Rodrigo Brandao will be a 2016 FLEFF guest.