Posted by Rebecca Cox at 5:33PM 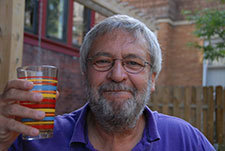 As I’ve discussed in my blog last week, this year’s Finger Lakes Environmental Film Festival theme is focused on Landscapes of all kind.

This week, I had the pleasure of sitting down and speaking with someone who knows a great deal about international landscapes: Associate Professor and Chair of the Anthropology Department, Dr. David Turkon.

As a sociocultural anthropologist, Turkon has conducted research mainly in South Africa, an area he is particularly interested in. From 1987 to the late 1990s, he spent time in Lesotho where he explored the effects of centralized government and global economy on the native people.

Recently, he has collaborated with Catholic Relief Services, Lesotho and University of South Florida to learn more about the spread of HIV and AIDS in Lesotho. There they focused on creating a community that promotes “good nutrition and sustainable poverty reduction” in order to halt the spread of HIV and to prolong the lives of those who were already infected.

Within the realm of FLEFF, Turkon is most known for his role of curating African Films. He finds that FLEFF is a great opportunity to represent African culture in a realistic way and find films that confront African stereotypes.

According to Turkon, relevant African films are not the easiest to find. They rarely get mainstream attention but they are indeed out there. He feels that there are many misconceptions about Africa and looks for films that “represent a place that has a unique identity.”

While Turkon isn’t a filmmaker himself, he says that he relies heavily on films in his anthropology classes because they can speak to a broader world around us. The dialogue after the films at FLEFF is particularly important to him, as he believes that many of the African films spark a good debate and discussion.

Another landscape Turkon has explored is Phoenix, Arizona where he volunteers with Sudanese refugees. Given the name the “Lost Boys”, many of these young boys have lost their families as a result of the civil war in Sudan.

With these past experiences in landscapes such as South Africa and Phoenix, Turkon explains, “FLEFF is a rare opportunity to see films you might not otherwise have the chance to see.”

Turkon looks forward to the upcoming festival and ultimately describes it as “a cultural event that brings together people in the community.”

How do you think anthropology affects films? What are some of your favorite African films?