FLEFF takeaway: Staring at the Sun

Posted by Lea Troutman at 4:21PM 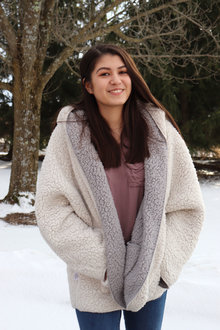 Staring at the Sun acts as a coming of age story that follows two Hasidic girls on their runaway from home and the dangers they encounter on the road.

Going into this film, I didn't know much about the plot or the Hasidic community in general, but I was mostly excited to see a film written and directed by an alumni. Staring at the Sun is directed and written by Ithaca College alumni, Harry Greenberger. During FLEFF, I attended the Staring at the Sun screening with discussion at Cinemapolis and a lunch in the Park school with Greenberger.

Greenberger himself and his film contained many disruptions. This films disrupts the Hasidic community and it is a feminist film written and directed by a Caucasian man.

The Staring at the Sun discussion was one of the better discussions I sat in during FLEFF. When someone in the audience commented on how the writing and cinematography of certain scenes could be seen as distasteful, Dr. Park-Primiano argued that this film stands as a feminist film. The women of the film were given the options to make their own choices on their own free-will.

Even though the trials and tribulations they endured were disturbing and uncomfortable to watch as the characters were preyed on and made naive decisions. This film doesn't hide, it instead confronts and shows the story of two girls figuring out life. I thought many of the decisions in the film represented the unknown factor and the negative sides of real-life. Despite everything Tasha and Edi thought they knew about life, they came to realize that it isn't what they expected with every twist and turn of this film.

Greenberger said in the discussion that he felt very protective over his characters when writing the script. Tasha and Edi were put into many dangerous situations throughout the film and Greenberger's intention with this was to paint a picture of their free choice. Even though these girls are so young, they're making all of their own decisions.

During the lunch when I asked him if he went into writing this with intentions of a feminist film, he said not at first but that is what it became as he developed the story, and he is happy if it reads that way. I definitely saw this film as a commentary on feminism from the beginning when the girls decided to run away.

During the discussion, a point about people of color in film was also arisen and it was something I didn't really take notice to. The audience member said that the only POC people portrayed in the film were shown in negative light. At the luncheon, Greenberger argued that this wasn't his intention, instead it was more about casting and the people available. Raul Castillo played Sonny in the film, who can be seen as an antagonist. Greenberger said Castillo actually chose this role. I can see why this can be seen as problematic, but I don't think Greenberger had negative intentions with these choices and as a director it is his responsibility to be aware of these perspectives.

During the lunch, we got to know a little bit more about Greenberger's life and his career journey. He told us stories about how his first film job was to toss a dog into a shot. He has come a long way since then. I really enjoyed hearing his personal story about he started from the bottom of the industry and has gotten to where he is today. Greenberger's story was very hopeful to hear as a film student.

He also touched on the negatives of the industry, like the oppression of women in film, topics that people tend to avoid when you're a woman spending all your money on film school. It was nice to hear someone finally be real and everything he discussed was very meaningful to hear as a student. One helpful tip he gave was to be open to all opportunities that come your way and to always try to be a nice person on-set and off-set. He also said to never lose sight of the art in filmmaking.

Harry Greenberger seemed like a very caring and down-to-earth person and I really enjoyed getting to meet him. I really wish I had more time to talk with him, but I was always on the move during the festival!