Posted by Kimberly Capehart at 12:02PM 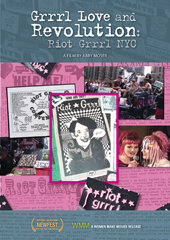 The first day of FLEFF is just a few days away!

The schedule of on-campus events was recently posted on the FLEFF website, which means it’s time to start getting your official game plan together for the 16th Annual Finger Lakes Environmental Film Festival!

Being the hyper-organized person that I am, I’ve already planned out my course of action. I’ll gladly share my top 3 events so YOU can get YOUR schedule together!

#1. Grrrl Love and Revolution – Riot Grrrl NYC and I Dream of Mummers: (4:00 pm – 6:30 pm, Mondat, April 1st, Park 285) I’ve recently found myself starting to become more involved in feminist groups in and around campus. And, as a female who is interested in punk music, I’ve also been very fascinated with the whole Riot Grrrl movement of the 1980’s. In addition, as a female who is interested in punk music who is also a Documentary Studies and Production major: the first film being shown in this session incorporates everything I could ask for. This session will end with a film called “I Dream of Mummers,” another documentary. This film shows an ancient tradition of dancing on the last day of winter – a practice that is popular in many places around the world. Philadelphia has their own annual Mummers celebration on New Years Day, so I have seen modern, American Mummers many times. I’m excited to see what traditional Mummers look like.

#2: Crafting the Bamasaba: Beyond the Physical Cut with filmmaker Dominica Dipio: (4:00 pm – 5:15 pm, Tuesday, April 2nd, Williams 323) This film is about imbalu - a ritual male circumcision performed on teenage boys in Uganda and Kenya. I watched a narrative film last semester, called “Moolaadé,” which portrayed female circumcision and genital mutilation in Burkina Faso. I though the film was brilliant, and I’m excited to see a documentary on the same relative subject. I’m most excited to speak with the filmmaker, herself, Dominica Dipio!

#3: Cup of Coffee with Kakfa with filmmaker Mansoor Behnam: (5:25 pm -6:40 pm, Thursday, April 4th, Williams 202) Don’t worry, I’m not only going to documentary films during the festival. “Cup of Coffee with Kafka” is an experimental film about… MOBILITIES! The film discusses mobilities in the literal sense (forms of transit, etc.) through interviews with scholars and the filmmakers. And while the filmmaker, Mansoor Mehnam, will be sharing his ideas on-screen, he’ll also be present to discuss his ideas with you in person! While the film may not actually be about coffee, feel free to bring your own! This promises to be an intimate and engaging setting for discussion.

Well there you have it, my top 3 on-campus picks for FLEFF. If you’re interested in seeing my top 3 picks for the films showing downtown at Cinemapolis, you can read about them here.

What are you looking forward to on campus?