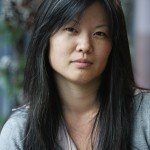 In blue jeans and a black jacket, Yang Jiwei sits cross-legged against the wall.  The usual spot in Guangzhou’s underpass.  Hunched over his guitar, he strikes the strings.  Shoulder-length, black hair shrouds his face.  He never looks up at those who pass by.  They never glance down.  A flick of a coin, the toss of a bill.  The music never falters.  Hurried steps never cease.  You hear his voice above the murmurings of a mass of bodies.

The Floating narrative unravels in a unique chronological order.  It starts in January 2003 and then slowly reverses to August 2002 of Jiwei’s life.  In exception, the final segment dated March 2003.

At first, the audience thinks of Yang Jiwei as an idyllic, carefree person.  Jiwei says, “Singers are free people” and “With no ambition, there are no worries.”

With the backwards transgression of Jiwei’s life, the audience sees the complexity and conflicts hidden behind his first impression.  Along with scenes of the police hounding the street musician, the documentary portrayed intimate moments in Jiwei’s life showing his turbulent love life.  Floating combined the politics with personal elements to capture urban life in China.

Eventually, the police arrest Jiwei since his temporary residence permit expired.  The police forcibly repatriated Jiwei back to his village.

Ms. Chien made the acute comparison, “In China, you have to have permits.  They have illegal migrants, and it’s analogous to illegal immigrants in the US.  There were no law or rights to protect them.”

In China, there exists a distinction between illegal internal migration and immigration.  These illegal migration laws served to limit the mobility of the population in the country.

Ms. Chien commented, “Floating came out in 2005, and it’s almost like watching a time capsule with how much China has changed.”

In part due to the Sun Zhigang incident, the State Council abolished the detention system which held the homeless or people without proper identification papers.  In its place, the government established a new system of shelters and public assistance postings.

Ms. Chien mentioned the difficulty of injecting Chinese cinema into film festivals.  Due to dGenerate Films and FLEFF’s partnership, audiences can hopefully expose themselves to likewise controversial films in future festivals.