Posted by Kimberly Capehart at 1:38PM 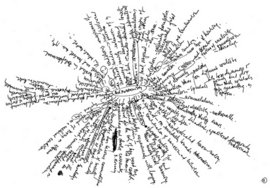 HABITATS reject fixed and stable identities: instead operating as collages of separate and interdisciplinary components

In February, I posted a blog exploring the theme of HABITATS. Entitled, "HABITATS: Landscapes of Discourse," I mused on the habitat as "any collection of...thoughts, writings, exchanges, and dialogues."

"Landscapes," I wrote, and therefore habitats, "as well as the discourses that occur within them, are fundamentally shaped and informed by the geopolitical, social, and historical factors that are highly dependent on their place or location."

But after having experienced 7 days of films, presentations, lectures, performances, dialogues, and conversations that interrogate this very question, I am thinking differently and more expansively about the festival's theme of HABITATS.

Though HABITATS evoke very specific spatial and temporal locations, both physically and in the vernacular, an important aspect of their construction is the crossing of boundaries and the refusal of a fixed and permanent status.

The cohesion of a HABITAT is illusory. By following a postmodern impulse, one questions the seemingly resolute and fixed identity of any habitat. Rather, HABITATS are the result of many processes operating simultaneously: many of which operate in various, seemingly disparate realms.

In an essay entitled, "Sequel to History," Elizabeth Ermarth, "an interdiscplinary cultural theorist" writes that "postmodern narrative can be instructively thought of as a temporal instance of collage, or rather collage in motion."

HABITATS are interdependent and interdisciplinary: the result of endless collaborations, negotiations, and reconciliations within themselves and between other HABITATS. They are "constantly evolving from internal dynamics and external challenges:" crossing borders, defying boundaries, and endlessly shifting and changing in response to their locale.

How has FLEFF changed the way you think about HABITATS?