Posted by Sophia Feuer at 2:30PM 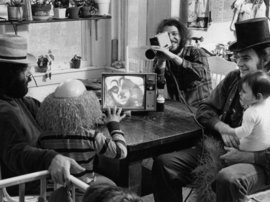 Following a week of exciting FLEFF events on the Ithaca campus from Monday through Friday this week, the fun will continue downtown at Cinemapolis! In fact, The Finger Lakes Environmental Film Festival weekend has much in store in terms of events. Don’t miss the rare opportunity to watch some incredible and significant films, as well as meet the many amazing artists and individuals that will be in attendance. Here are five events that you just cannot miss:

On Thursday at 7 PM, A Thin Wall will be screening, followed by filmmaker Q&A with Mara Ahmed. The documentary focuses on Partition of India in connection to the urgently relevant issues that remain today. Through the voices and stories of many, Ahmed reveals a personal interpretation to her understanding that has been passed down from generation to generation.

Playing on Friday at 8:30 PM, Here Come the Videofreex is a documentary that takes a look at the 1960’s and 70’s and the radical video group that democratized the future of media. Jon Nealan, the documentary filmmaker, will be in attendance for a Q&A discussion to follow!

Bing Wang is a Chinese director who is considered to be significant in the field of documentary filmmaking. Playing on Saturday at 3:15 PM, his film Three Sisters explores poverty in China through this small family high up in the mountains of the Yunan region.

4) We Need the Truth with filmmaker Cynthia Henderson

Screening on Sunday at 1:05 PM, Cynthia Henderson’s documentary We Need the Truth shows how the theatre for social change workshop focuses on creating monologues by graduate students at the University of Dschang in Cameroon. These monologues are real life accounts on how the war with Boko Haram is affecting the people of Cameroon. Following the screen is a filmmaker talk with Henderson.

Playing on Friday at 6:45 PM, Btzabe Garcia’s documentary Kings of Nowhere will be screening, followed by Q&A with Carlos Gutierrez. The film captures the lives of three families in San Marcos, Mexico, living in a ghost town that has been erased from all maps.