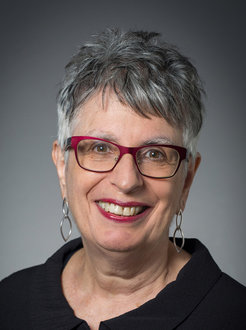 If you’ve ever made a trip to Cinemapolis, you have Sue Perlgut to thank.

Ms. Perlgut has worn many hats throughout her career. Prior to forming ClosetoHome Productions and becoming a fully-fledged filmmaker, she went to New York University for graduate school and owned both a book and clothing store. Of all the projects that she has worked on and throughout all of the experiences that she has had, it is clear that Ms. Perlgut's contributions are deeply informed by her passions for feminism, activism, and, especially, her local community.

After her retirement, Ms. Perlgut has not once thought to slow down. She’s since acted in her first film, serves on the board for multiple community organizations, founded her neighborhood association, and, at one point, volunteered as a former chair for the Tompkins County Strategic Tourism Planning Board. Most impressively, however, is her involvement with film: in which Ms. Perlgut has once again found a perfect combination of the activism she’s fought for her entire life, with the creativity that’s been integral to her work from the start.

“Being involved with film felt like a natural extension to everything I was doing beforehand, so why not?”

Even after so many years and so many different experiences, roles, and job titles, Ms. Perlgut says she still had a couple of first experiences while making the film. Despite being a seasoned filmmaker, she notes that it was her first time editing, as well as her first time doing archival research.

Starting with a series of small-scale, local productions, including a short documentary titled "101 Ways to Retire - or Not!," a strength training video, and a documentary titled "Beets and Beans: Living and Dying with Hospice," serving to dispel preconceived notions about hospice care,  Ms. Perlgut established herself in a new role as a filmmaker to the Ithaca community.

Beets and Beans was screened for students at the Roy H. Park School of Communications not too long ago. “Hospice is a difficult topic I wanted to shed some light on, and what was interesting to me was how different audiences would see the film.” Ms. Perlgut’s parents were both patients of a hospice program, a very personal part of her life. “I had no idea how the audience would react. The students got so silent.”

Her latest project, "Connie Cook: The Documentary" is a film two years in the making about Constance Cook, the Republican Assemblywoman from Ithaca who led the fight to decriminalize abortion in New York state in the 70s, setting the precedent which was cited in Roe v. Wade. The film includes archival footage from Cook’s life, work, as well as highlighting her fighting spirit, and was also an official selection for the Finger Lakes Environmental Festival.

Being the president of the board at Cinemapolis, the ninth wonder of the world to the Ithaca community, bears a heavy responsibility. The member supported arthouse cinema has strove to show films that don’t get a mainstream wide release. The Finger Lakes Environmental Film Festival is able to provide for Cinemapolis, and vice-versa.

“FLEFF brings Cinemapolis money that we wouldn’t see otherwise, and I’m seeing films and presentations I know I wouldn’t be able to without the festival.”

With a career that's taken many forms, but ultimately serves to promote some spark of creativity, Ms. Perlgut continues to prove to the Ithaca community that her work is far from done.