Posted by Kimberly Capehart at 11:58PM 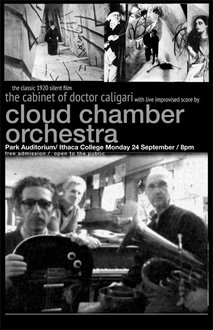 Ithaca's very own Cloud Chamber Orchestra will be playing an original live score to the classic documentary, Grass: A Nation's Battle for Life, this Tuesday, January 28th, 2014 at the Sage Chapel at Cornell University. The beautiful interior of the chapel should make a pleasant backdrop for what is sure to be an unforgettable performance by an incredible group of musicians.

The group has performed original, improvised film scores for films such as Nanook of the North, The Cabinet of Dr. Caligari, and The Great White Trail, among others, and continues to be an annual favorite at FLEFF favorite.

White, the cellist of the group, says that the excitement of playing an improvised score comes from "playing with such good musicians and improvisers" but also "the unknowns that go along with [playing live music] with the film in front of a live audience."

Grass: A Nation's Battle for Life is considered by many to be the first ethnographic documentary. Made in 1925, the film follows a group of people from the Bakhtiari tribe of modern-day Iran as they lead their herds of livestock on a treacherous, annual journey through a mountain range to better pastures.

Despite the inherent difficulties in scoring a documentary, White insists that the story in the documentary is so compelling that improvisation won't be much more difficult than it would be for a narrative film.

"We usually prepare by first watching the film, either individually or together, and then we talk about it," says White.

"Often we'll come up with general strategies of musical style and instrumentation. Peter and Robby both play multiple instruments while I usually stick to the cello. Then we begin rehearsing by improvising while we watch the film. Each time we play with the film the music is different because it's all improvised, but each time we are getting to know the film better, and our interpretation becomes more firmly established and more closely aligned with the film and how we want the score to sound for the movie we're working with."

The screening of Grass: A Nation's Battle for Life, kicks off at 7:30 PM this Tuesday, January 28th at the Sage Chapel at Cornell University. Get there early so you can get a front row seat to see Ithaca's favorite musical group (and a sneak peak of what their performance at the Finger Lakes Environmental Film Festival will be like!).

What was your favorite Cloud Chamber Orchestra performance?